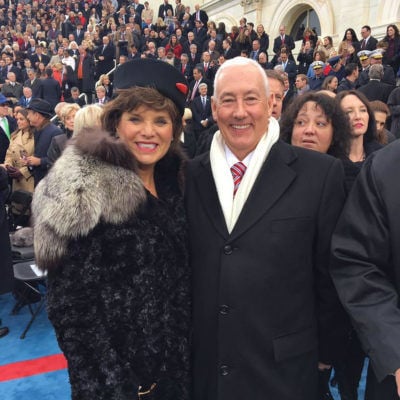 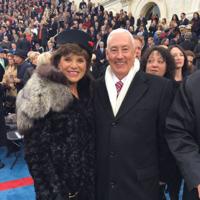 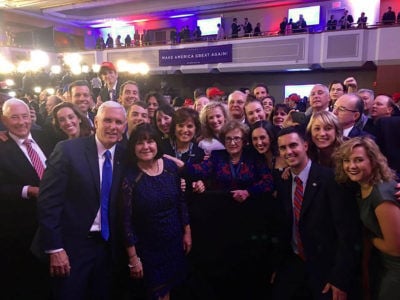 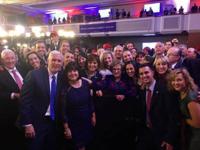 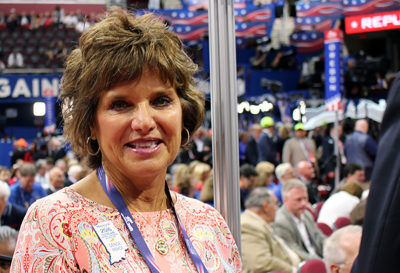 Denise Pence, sister-in-law to Vice President Mike Pence, represented Indiana as a delegate at the Republican National Convention. She was a day one Trump supporter and never imagined she’d be voting for her brother-in-law, Mike Pence, to become vice president. Photo by Adrianna Pitrelli, TheStatehouseFile.com

By Adrianna Pitrelli TheStatehouseFile.com INDIANAPOLIS — Since casting a vote to nominate her brother-in-law to become the Republican vice presidential candidate in July 2016, Denise Pence has been nothing but proud. [caption id="attachment_33329" align="alignright" width="244"]

Denise and Gregory Pence pose for a photo at the 58th Presidential Inauguration in Washington, D.C. Vice President Mike Pence is Gregory Pence’s brother. Photo provided.[/caption] “It was just a moment in time you never forget,” she said. Months before Vice President Mike Pence became part of the Trump team, Denise Pence looked forward to casting her vote for Donald Trump as an Indiana delegate at the Republican National Convention. She calls herself a day one Trump supporter. “I always knew Trump was going to win,” she said. “I didn’t know that his running mate was going to be my husband’s brother.” But she was confident they would win. Denise Pence, of Columbus, is married to the vice president’s oldest brother, Greg. It’s been nearly a year since Mike Pence was elected to his new role, and Denise and Greg Pence are still adjusting to the attention they often receive when in public. Nothing but graciousness, positivity and niceness has been given to the couple, she said. “Gregory is the eldest of six and Mike looks like him,” Denise Pence said. “Even if we are in another state or country, people will often do a double take or when we check into a hotel with our last name, they’ll ask if we are related to Mike.” Despite Vice President Mike Pence and Second Lady Karen Pence being busy in their new role, Denise Pence said they are settling in well in Washington and still always make time for family. “When you go to visit them, nothing is different, it’s just like hanging out with family,” Denise Pence said. “We are happy for the time we get to spend with them and they’re happy with the time they get to spend with us because they are so busy.” [caption id="attachment_33328" align="alignleft" width="303"]

The Pence family poses together on election night after Mike Pence becomes vice president-elect. Photo provided.[/caption] The tight-knit family spent election night together with about 16 family members sitting in the Hilton Midtown hotel in New York City, anxiously waiting an outcome. “We were waiting forever,” she said. While the polls said the election was going to the Democrats, Denise Pence said she knew the numbers were wrong. “NBC Chicago interviewed me that night and they asked me how I felt and I told them I felt really strong that Donald J. Trump was going to be the next president of the U.S.,” she said. The reporter, she said, quickly rebutted the polls said otherwise. Denise Pence stuck to her guns, saying she hadn’t been polled and knew numerous other people who weren’t polled so it couldn’t be right. “I think when Donald Trump and Mike won, it was shocking to them and a lot of people,” Denise Pence said. “A lot of people were really in shock, but I wasn’t at all.” Then after what seemed like hours, the numbers came in — Denise Pence’s brother-in-law would soon be sworn in as the second in command of the country. “It was just a moment in time that is hard to describe,” she said laughing. “It was really, really awesome.” [caption id="attachment_33330" align="alignright" width="325"]

Denise Pence, sister-in-law to Vice President Mike Pence, represented Indiana as a delegate at the Republican National Convention. She was a day one Trump supporter and never imagined she’d be voting for her brother-in-law, Mike Pence, to become vice president. Photo by Adrianna Pitrelli, TheStatehouseFile.com[/caption] Denise and Greg Pence alongside 32 members of their family traveled to Washington, D.C. for the 58th Presidential Inauguration. The couple had seats on the main stage where Pence was sworn in. Afterward, they attended the post-inauguration luncheon, the vice president's ball and watched their hometown band, Columbus High School, in the parade.  “It was a really fun time and again just a moment in time you will never forget, seeing your brother-in-law become vice president,” she said. Adrianna Pitrelli is a reporter for TheStatehouseFile.com, a news website powered by Franklin College journalism students.