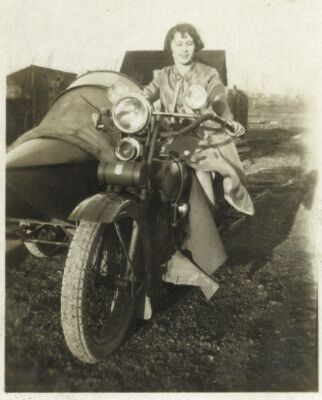 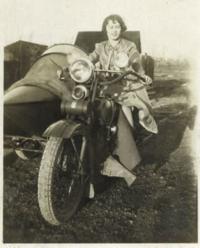 Ann Schulteti on a Harley-Davidson with a sidecar in 1929. Provided photo.

INDIANAPOLIS — For one Indianapolis family, Harley-Davidson is more than the name of a famed motorcycle brand. “We’ve made thousands of friends,” Bob Schulteti said. “Motorcycling, of course, is a thing much better understood now than it ever was. We’ve always known it from the beginning.” Schulteti, 84, is the second-generation owner of the Indianapolis Southside Harley-Davidson store. The store, located near Southport Road and Emerson Avenue, is celebrating its 70th anniversary, and the Indiana Historical Society has discovered a way to celebrate the milestone. Harley enthusiasts can visit the historical society beginning Saturday for a chance to go back in time and see where the Southside Harley store got its start. “The Harley Shop: Seventy Years of Indianapolis Southside Harley-Davidson” exhibit features photographs, Harley-Davidson memorabilia and racing gear — all gathered from the Schulteti family. “We certainly wanted to commemorate the incredible history that family and organization has had here in the city in a couple different locations,” said Eloise Batic, the historical society’s director of exhibits. [caption id="attachment_32331" align="alignright" width="589"]

The photo on the left shows the original Indianapolis Southside Harley-Davidson shop located at 701 S. Meridian St. while still in operation. The photo on the right is the building as it sits now, closed. Photo on the left provided. Photo on the right by Eddie Drews, TheStatehouseFile.com[/caption] George Schulteti, Bob’s father, got his start in the Harley business in 1922 when he started sweeping floors of the factory service department. From that point on, he entered the research and development field and eventually became a test driver for the motorcycles before they went on the market. It wasn’t until 1947 that George Schulteti established the Indianapolis Southside Harley-Davidson shop. Bob Schulteti was just 14 years old, and if he wasn’t at school, he was in the shop with his father. “I’ve done all the jobs there are to do in this business from this beginning,” said Bob Schulteti. Batic said it wouldn’t be a Harley-Davidson exhibit without a few motorcycles. Seven Harley-Davidson motorcycles representing the last seven decades will be on display in the exhibit. “I hope visitors would just enjoy this opportunity to learn a little bit more and celebrate the history of Harley-Davidson, which is such a pop-culture, uniquely American part of our society,” Batic said, “but do it through the lens of a Hoosier family that has played such a significant role for 70 years.” [caption id="attachment_32352" align="alignright" width="245"]

Ann Schulteti on a Harley-Davidson with a sidecar in 1929. Provided photo.[/caption] For the Schulteti family, future plans include preparing the younger family members to carry on the tradition. “The most rewarding thing is watching people who have had a dream to own a Harley-Davidson finally get it and leave with a big smile on their face,” Bob Schulteti said. “That usually stays for years, and sometimes even generations.” The Indiana Historical Society is open Tuesday through Saturday, 10 a.m. to 5 p.m. The exhibit opens to the public Saturday, July 22. Tickets are $9 for adults, $8 for seniors 60 and older and $5 for children ages 5 through 17. For more information, visit indianahistory.org.

Shelby Mullis is a reporter for TheStatehouseFile.com, a news website powered by Franklin College journalism students.