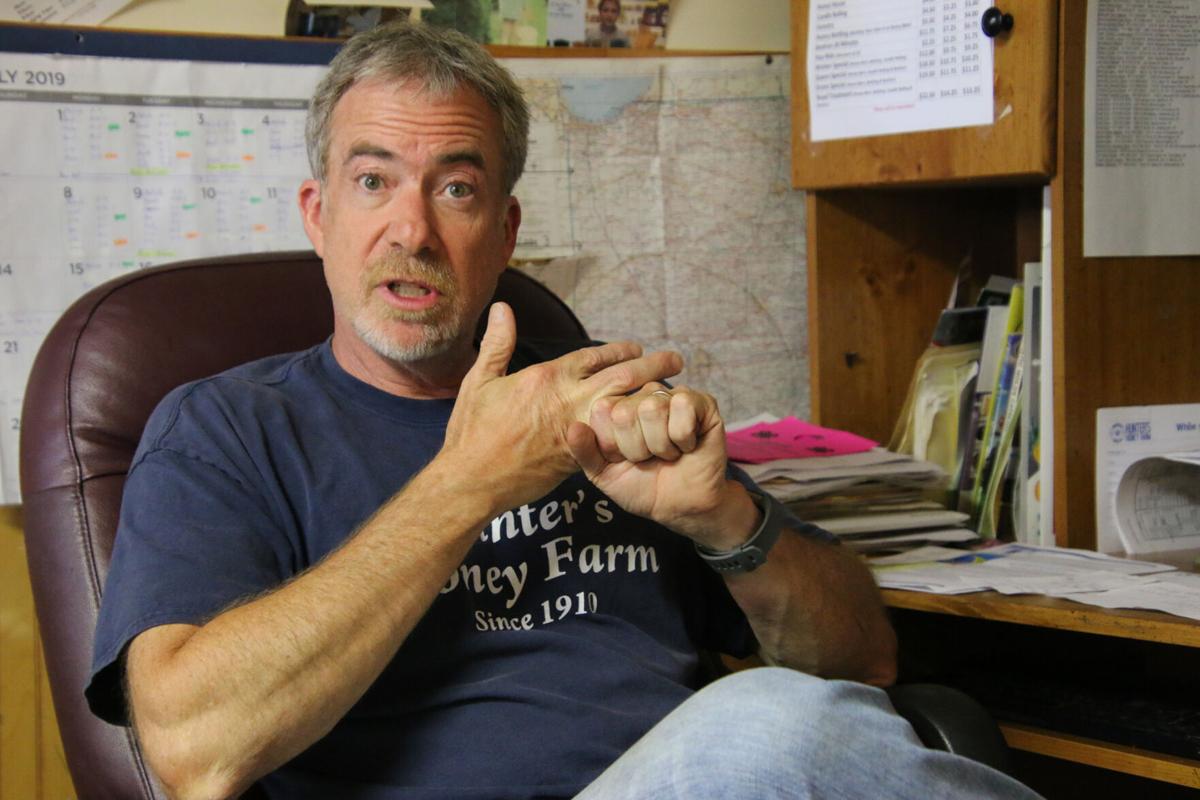 Hunter’s Honey Farm owner Tracy Hunter talks about how beekeeping has been in his family for four generations. Photo by Lacey Watt, TheStatehouseFile.com. 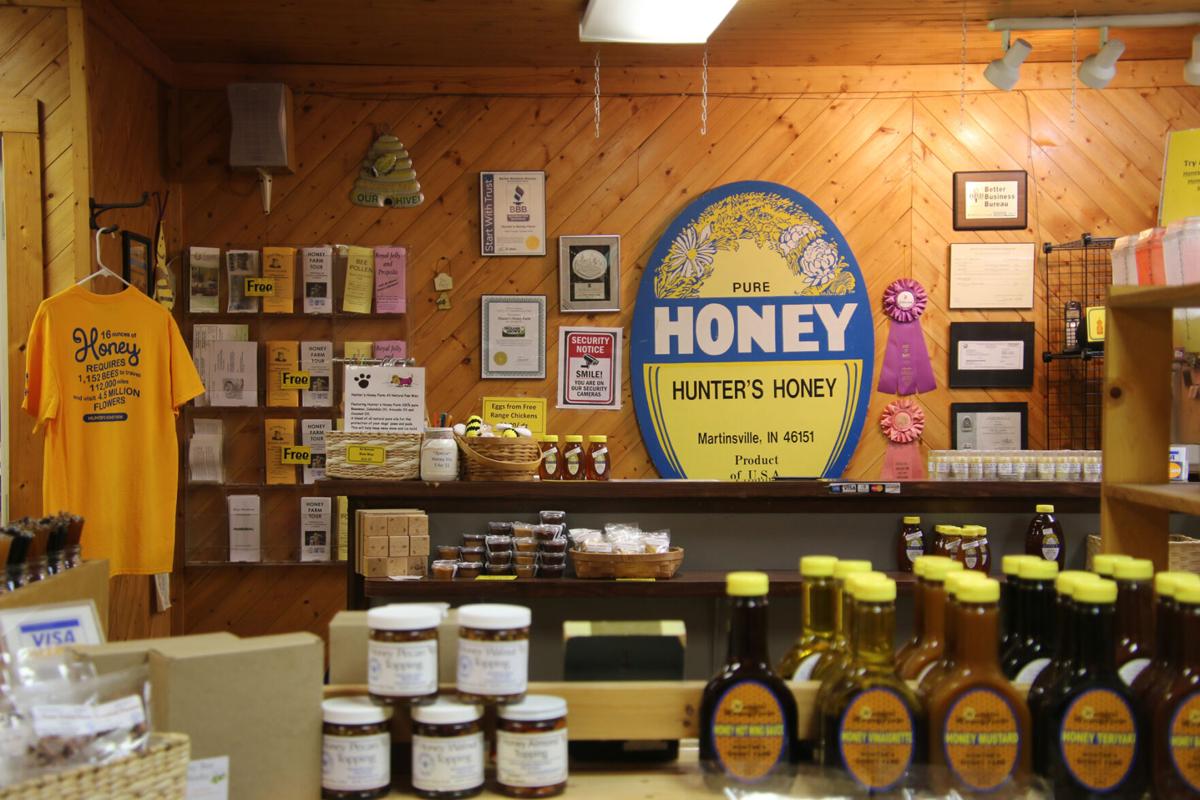 All kinds of products made with honey line the shelves in Hunter’s Honey farm lobby. Photo by Lacey Watt, TheStatehouseFile.com 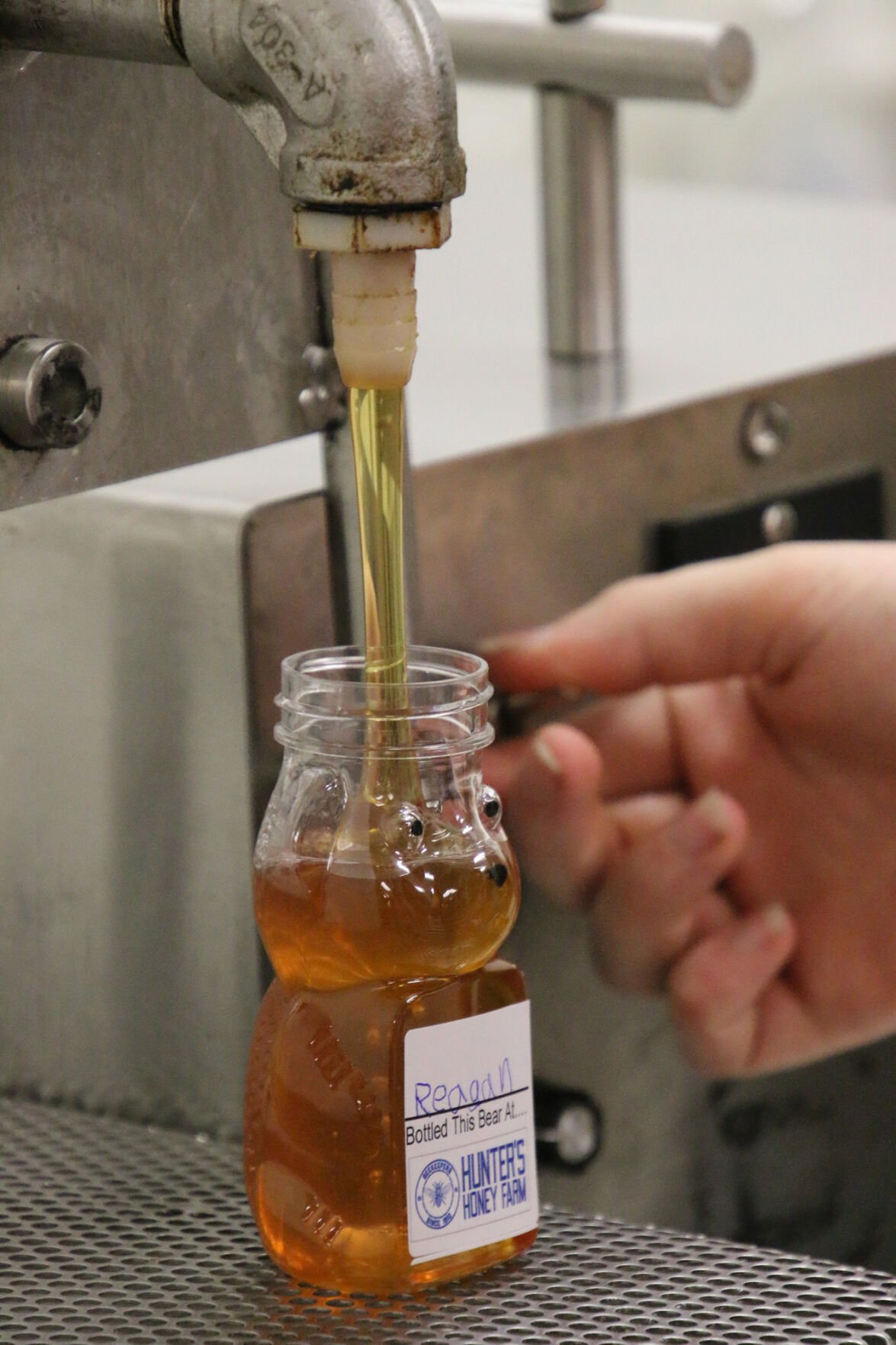 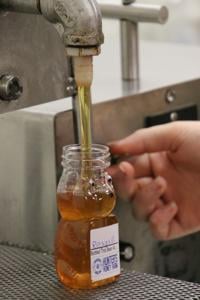 Honey fills the bear bottle that is offered on the tours at Hunter’s Honey farm. Photo by Lacey Watt, TheStatehouseFile.com. 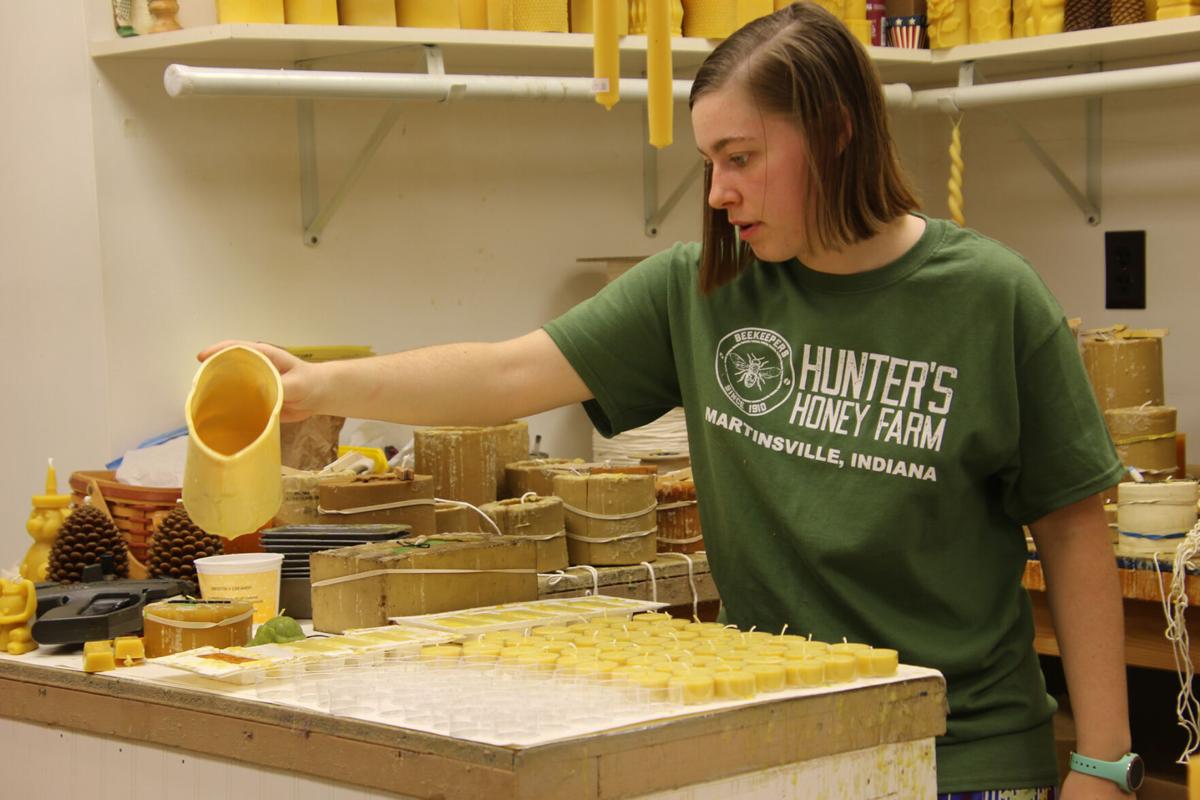 Out of Office is an occasional series about the people and place of Indiana.By Victoria Ratliff   TheStatehouseFile.com MARTINSVILLE, Ind.— Tracy Hunter’s life in beekeeping took root more than a century ago when his maternal grandfather, Gilbert Perigo, was given a beehive as a high school graduation present from his parents. By 1910, Perigo was managing several hives to pollinate his father’s apple orchard in southern Indiana, eventually building up to 800 while also teaching. [caption id="attachment_39530" align="alignleft" width="279"]

Hunter’s Honey Farm owner Tracy Hunter talks about how beekeeping has been in his family for four generations. Photo by Lacey Watt, TheStatehouseFile.com.[/caption] He was followed into the business by his daughter, Hunter’s mother, who built her own apiary of 12 hives, also while continuing to teach. The simple gift of a beehive spawned a business that has lasted for more than 100 years and through four generations. Today, located off of Honey Lane in Martinsville, sits the farm, its 65 acres of hardwood timber used for Christmas trees, and 400 beehives. Hunter got his start in the family business when, as a child, he sold honey out of the family garage after being given a beehive, but when he left for college, he wasn’t sure whether he wanted to continue beekeeping or pursue a career in teaching. While attending Purdue University, he worked for the Indiana Department of Natural Resources every summer alongside the apiary inspector, where he would inspect beehives across the state for diseases and trends. [caption id="attachment_39524" align="alignright" width="354"]

All kinds of products made with honey line the shelves in Hunter’s Honey Farm lobby. Photo by Lacey Watt, TheStatehouseFile.com[/caption] During this internship, he realized that beekeeping was something he wanted to continue for years to come. However, he still wanted to pursue a career as a science teacher. So, he planned to teach for about five to 10 years while he helped build the business. But five to 10 years of teaching turned into 32. Hunter taught in the same classroom at Indian Creek Middle School before he eventually quit to focus on the honey farm full time. “It got to the point where the business was requiring more of my time,” he said. “The business was suffering because I wasn’t here.” In the late 1980s, the bee population began to decline. Hunter said he was glad he kept his teaching job to supplement for the money the farm wasn’t able to bring in. The business lost many hives and it would have cost tens of thousands of dollars to replace them, Hunter said. Though he manages the business fulltime, Hunter is still a teacher at heart. The activities on the farm are fun, but his favorite part is educating visitors about bees. During tours, visitors are taught about the bees and beehives and how the process of getting the honey works. Everything that a bee produces is talked about, including honey, bee pollen, royal jelly and propolis, each with their own health benefits, and all sold in the shop. [caption id="attachment_39527" align="alignright" width="296"]

Honey fills the bear bottle that is offered on the tours at Hunter’s Honey Farm. Photo by Lacey Watt, TheStatehouseFile.com.[/caption] Lisa Vogel took the worker special tour with her two daughters. She said that her youngest daughter, Reagan, is less afraid of bees after learning that honeybees only sting in life-or-death situations. “I think they’re a little more educated now,” Vogel said of her daughters. “I learned a lot about bees, and I didn’t know nearly all those things we heard.” Vogel said the information presented during the tour also made her think about not only the health benefits of honey, but how much of our food honeybees pollenate, and their role in our everyday lives. The farm offers a variety of tours and activities, giving visitors a chance to see what the farm has to offer. Tours begin the shop and take visitors to storage, an area stacked high with 55-gallon drums of honey. While in the storage area, the tour guide explains more about honey and honeybees, describing the different bees’ roles like queens and workers. In their lifetime, a honeybee will only produce a total of one-twelfth of a teaspoon of honey. From storage visitors go to an area where candles are made. Behind a small pane of glass, is a station with all of the molds and melted beeswax needed to create the different candles the shop sells. Around the corner from the candle making station, are barrels where honey is warmed up prepare for bottling or cooking. And next is the spout that releases the honey where visitors can fill their own honey bear containers. Visitors who want more can suit up in the hooded beekeeper outfits and tour the hives themselves. Hunter’s son, Ross, is considering following in the Hunter family’s footsteps. Although he isn’t sure whether he wants to become a beekeeper, he is currently teaching beekeeping for the Peace Corps in Guinea, Africa, where he is interested in getting a job with the United Nations to teach sustainable agriculture. His daughter, Mackenzie, while also unsure whether she wants to join in on the family business, is studying biology at Purdue University where she hopes to be a wildlife veterinarian after graduation. She travels to different farmers’ markets to sell their honey. [caption id="attachment_39526" align="alignright" width="357"]

Hunter’s Honey Farm worker Lily Rainwater demostrates how the beeswax collected from hives is used to make candles. Photo by Lacey Watt, TheStatehouseFile.com.[/caption] At the farm, Hunter encourages visitors to taste different types of honey and the differences among them. One of the samples is their Indiana State Fair winning honey. The farm submits the honey to local 4-H fairs and the state fair, garnering ribbons that decorate the stands the honey sits on and Hunter’s office. Hunter says, however, knowing your beekeeper’s face, and knowing where and how your honey is made is the most important aspect of buying honey. Consumers don’t know the origins of honey at the grocery store, but at their farm people can see the bees, the drums of honey, and the spout that delivers the honey. “There are many beekeepers in Indiana, and there are many good places to get your honey,” he said. “Just make sure you know the beekeeper’s face.” Victoria Ratliff is a reporter for TheStatehouseFile.com, a news website powered by Franklin College journalism students.