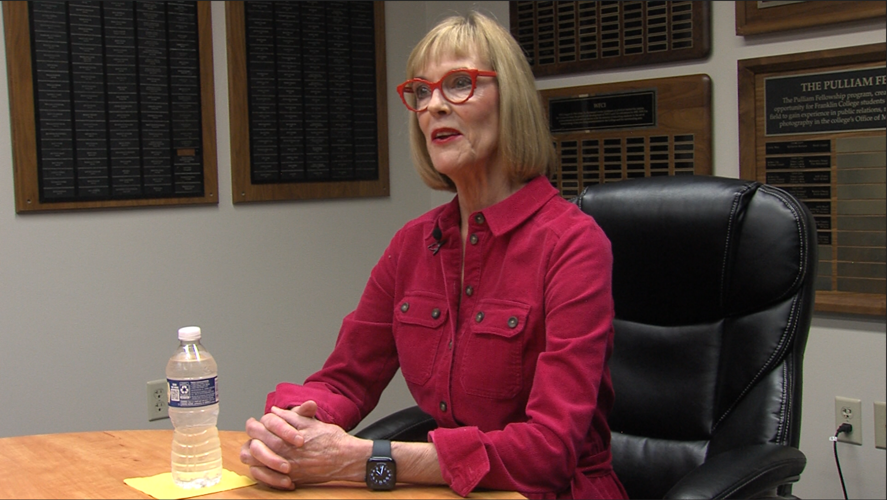 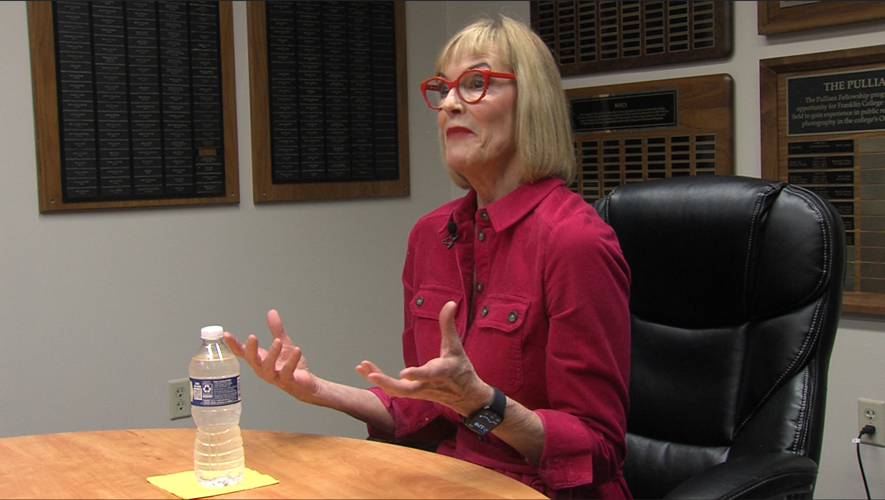 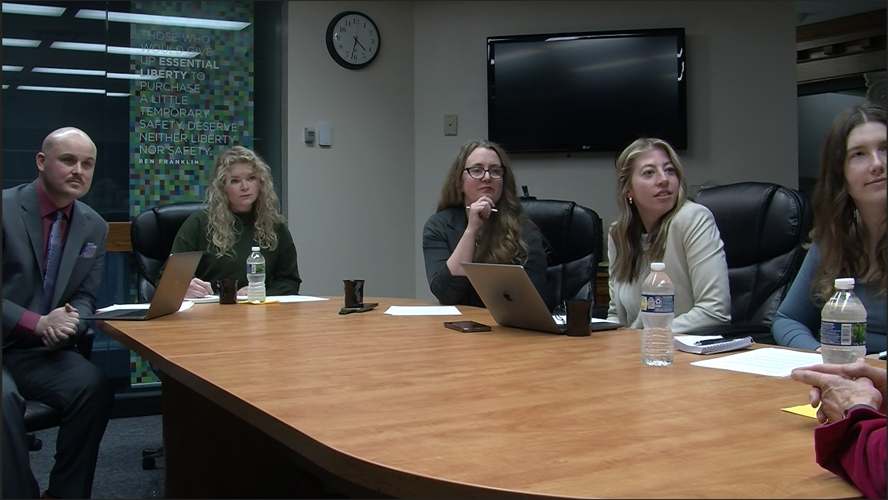 This week, Lt. Gov. Suzanne Crouch visited The Statehouse File at Franklin College's Pulliam School of Journalism for a wide-ranging, hour-long conversation. In her signature red glasses, she fielded questions on everything from her early-stages campaign for governor to her feelings about women's representation in state government.

Even though the 2024 Indiana governor's race is still a ways out, Lt. Gov. Suzanne Crouch is raising money for her campaign, releasing political ads for potential constituents and scoping out the competition.

On Dec. 12, she announced her bid to be the 52nd governor of Indiana. If Crouch takes the race, she would be Indiana's first female governor and the oldest ever to take the seat at 72. Incumbent Eric Holcomb is ineligible to run due to term limits. Some front runners for the vacant seat would include Republican Sen. Mike Braun, Republican candidate Eric Doden, and former Republican superintendent of public instruction Jennifer McCormick, who has said she might run as a Democrat.

Regarding that competition, however, Crouch believes the only person she has to worry about is herself.

"I wish I had a natural-born competence that I could get up and say or do anything, but I don't; my competence comes from knowing and understanding," she said. “I feel like I don't have the confidence to be able to do the things that I should be doing, and that's why I push myself out there—because I have to be confident in what I know and do."

Whether Holcomb will hand her his endorsement is still to be determined, but Crouch said she isn't worried about confirmation from others.

She recalls a time when she ran in Vanderburgh County for auditor and sought an endorsement from someone she graduated high school with. "I don't endorse candidates," he said. "You don't deserve to be elected if you can't get people to vote on your own."

"The endorsement of Hoosiers is the most important to me," said Crouch. "I don't put a lot of stock in other people's endorsement."

Taking those first steps is usually the most challenging part of deciding to do something meaningful. It's been no different for Crouch.

"My life has been about doors opening and then deciding to go through them. Sometimes it's with a bit of trepidation that I have gone through some of those doors, but I also learned very early on that I never know what I'm capable of becoming if I don't take a chance."

Regarding campaign strategy and funding, Crouch said she tunes out opposition to avoid being reactive. She currently has raised $3.1 million for her campaign.

"Other candidates are going to say or do something, and your immediate reaction is to react, so my goal right now is not to spend any money because I'm not a self-funder," said Crouch. “I'm not in the position to self-fund, and my money comes from the thousands of Hoosiers all over Indiana."

Crouch emphasised not jumping the gun and keeping funds in reserve.

"I have to be very thoughtful and strategic about how I spend my money and when I spend my money," said Crouch "I will be spending as little money as I can in 2023, knowing that primary isn't until May 2024.’’

Q’s with Suz (are we allowed to say that??): Lt. gov. picks her Hoosier favorites

Lt. Gov. Suzanne Crouch sat down with TheStatehouseFile.com to reveal some of her Indianapol…

In her time as lieutenant governor, Suzanne Crouch has shown a special interest in mental health and addiction, sitting on several boards and sharing her own personal story on why those issues matter to her.

“The story is, my mother suffered from depression," she said. "My sister Nancy died by suicide, and we buried my brother Larry in November and he was an alcoholic. I have grown up with family members that have suffered from mental illness or addiction, and that is what drove me to be an advocate for that.”

Crouch also referred to a sexual assault in her past. In her very open conversation with TheStatehouseFile.com, it was just one indication of what issues and policies she might address if elected as the state’s chief executive.

In a campaign video, she has mentioned a desire to improve transparency in the operations of government. In her sit-down at Franklin College's Pulliam School of Journalism, she recalled her time as a county auditor back in the 1990s and her efforts to transition public information to the internet. That should be a continuous project, she said.

“We have so many programs and initiatives in government and state government that benefit people, but people don’t know about them or how to access them,” she said. “As governor, I will work to make the government more user friendly for the public so they can be better connected and get the benefit from their government.”

She also discussed the state’s income tax. Senate Republicans have recently floated the idea of eliminating it.

“I’m going to be pretty engaged in that issue because I would love to see us be a state that has no or low income tax, to be able to compete with some of our competitor states,” she said. “I think it's going to take a very careful and thoughtful examination of our entire tax structure to see if we can make up for that and if it's a possibility for Indiana.”

Crouch is a supporter of Indiana’s abortion ban but stopped short of endorsing mandatory sex education in public schools, calling parental involvement the most important factor in a child’s education.

“The school board makes a lot of the decisions in terms of the education, curriculum and pay, which is taking place at the local level,” she said. “We saw in the last election cycle, school board races being the most contested races, and people are very engaged at that level, which to me is refreshing.”

The Evansville native often referred to the “Hoosier values” she has showcased in her campaign so far.

“Hoosier values are what we all think are important to our quality of life. It’s who we are and how we are raised,” she said.

That doesn’t mean she thinks she can make all voters happy, though. Crouch said the way you have peace about displeasing some people is by staying true to your beliefs.

“The ability to be able to be in a position to affect policy that improves people’s lives and provides them with more opportunity ... I don't think there is anything greater,” she said.

Lt. Gov. Suzanne Crouch’s iconic red eyeglasses became part of her 2014 campaign for auditor of state. She wore them because she liked them, it was politically advised that she lean into them, and after the election, she said she was stuck with them.

Her appearance, which women in politics can face disproportionate criticism over, was something she had chosen to empower her.

Now launching her campaign for governor of Indiana almost 10 years later, she reveals that she tried to ditch the glasses after the auditor of state race. However, they’d become part of her brand despite her never intending them to.

As for her involvement in government, it was never the plan for her either. But it wasn’t by mistake.

“My life has been about doors opening and deciding to go through them,” she said.

Raised in Indiana, Crouch grew up with what she describes as “Hoosier values,” the same ones mentioned in her campaign video.

“Hoosier values are what we all think are important to our quality of life. … It’s who we are and how we are raised,” she said. Working hard and helping others have been guiding principles of her life, she said, which brought her to public service.

She recalled that, before her start in politics, she would vote, but she would always pick the female candidates, regardless of party.

She became more interested in politics after Ronald Reagan's presidency, and she can still quote him spontaneously: “Freedom is never more than one generation away from extinction. We didn't pass it to our children in the bloodstream. It must be fought for, protected, and handed on for them to do the same.”

When she was starting in politics, women were often left out of the room.

“I’m still the only woman in the room sometimes,” said Crouch. She believes women are underrepresented in not just the Indiana General Assembly but in those of many other state governments as well.

She cited studies that determine the reasons why women don’t run for office. It has to do with the way they are raised, hesitation to ask for fundraising money and a handful of other social reasons. “I had to see myself as an investment,” said Crouch.

“We need more minorities in the rooms,” she said. Crouch believes that, ideally, bodies of lawmakers would closely mirror demographics.

However, Crouch herself identifies more with the job, as opposed to a member of a gender doing the job. “I don’t see myself as a person of an age, or a person of a particular gender,” she said.

Her work can be challenging. As lieutenant governor, Crouch presides over the Indiana Senate. If a vote comes to a tie, she’s the tie-breaker, but she has only had to do so twice. Most notably, in July, she voted in favor of an amendment to Senate Bill 1. During this time, many amendments to Indiana’s controversial abortion ban were wrestled with, and the one she voted in favor of requires an affidavit to be notarized before survivors of rape can obtain a legal abortion.

“That amendment itself did not seem burdensome to me,” Crouch said. Her attitude about leadership relies on an understanding that not everyone will be happy with her decisions. She said this skill has come with age, experience and confidence in her knowledge. She doesn’t suffer over her choices.

“To me,” said Crouch, “leadership’s about making decisions.”