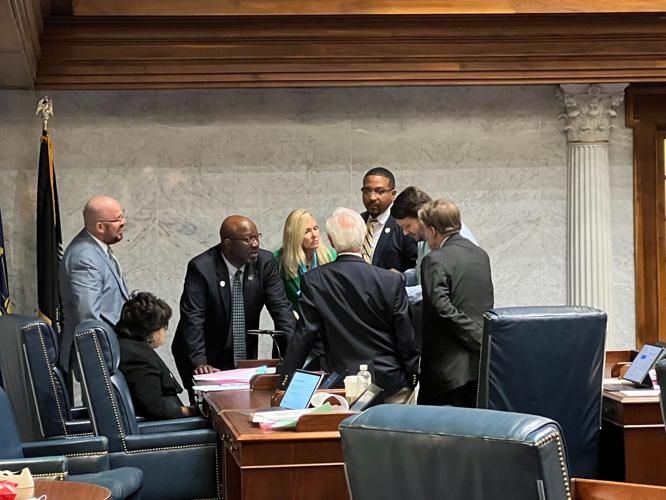 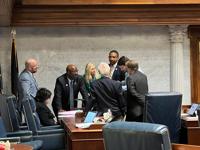 Democratic senators huddle before the start of Thursday's Senate session. 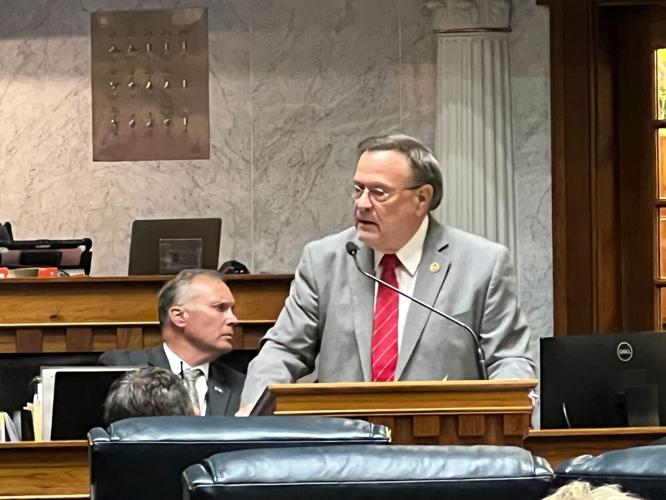 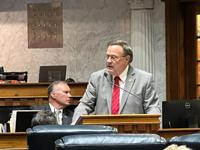 Sen. Michael Young, R-Indianapolis, who left the Republican caucus Thursday morning, set off a fierce debate that afternoon with his amendment that would have removed exceptions for rape and incest from a proposed state abortion ban.

INDIANAPOLIS—“Let me tell you, this is the great debate. People will remember what we did.”

That’s what Sen. Michael Young, R-Indianapolis, said while giving closing remarks for his Amendment 58, which would get rid of the rape and incest exceptions included in Senate Bill 1. The amendment sparked a polarizing two-hour debate that dominated Thursday’s Senate session, which was still in action near midnight.

The Senate was originally scheduled to convene at 1:30 p.m. Thursday. After six delays, the session finally started at 5 p.m.

The Republicans delayed the meeting so they could debate amendments to the bill within caucus. The behind-closed-doors debate led to Young officially leaving the Republican caucus Thursday morning.

The session began with discussions on the 18 proposed amendments to Senate Bill 2, only one of which, concerning Medicaid reimbursement, passed. Pushing Senate Bill 3 to the end of the session, senators dove into a contentious discussion of SB 1’s 62 separate amendments on a host of different issues.

Young touched off a more than two-hour, often hostile discussion of his Amendment 58, calling for no abortion exceptions except for the life of the mother.

“The life of the mother is the exception because we believe in self-defense,” said Young.

Many lawmakers, Republicans and Democrats alike, questioned Young on this stance, asking why the senator wouldn’t make the exceptions for incest and rape. Young said he could not ask any person to give up their life, but if their life is not at risk, they should not able to have an abortion.

Many Democrats especially expressed their horror at the proposition. Sen. Rodney Pol Jr., D-Portage, called it a “massive win for rapists.”

“You are giving a rapist the ability to choose the mother of their child,” he said.

Fady Qaddoura, D-Indianapolis, said religions view the topic of abortion differently and that religion should not be used as an argument for not having a rape exception.

Sen. Ron Alting, R-Lafayette, said that although he believes in God, he could not imagine telling a woman they have to keep the baby of their rapist. He talked about his daughters and how he’d hope they would have a choice.

“You’re no closer to God than any of us who are going to vote no,” said Alting.

“I think the world of you, Sen. Young, but when I read this amendment, my mouth dropped,” said Breaux. “I will just say this is an outrageous proposal fueled by the arrogance of the majority.”

Young wound up the discussion, saying, “This is the most important issue in our lifetime. I had to give up so much for what I believe in.” But the amendment failed with 18 yeses, 28 nos and 4 no-votes.

The Senate was still debating amendments near midnight. Look for more details Friday in TheStatehouseFile.com.

Zachary Roberts is a reporter for TheStatehouseFile.com, a news website powered by Franklin College journalism students.

Sorry, there are no recent results for popular commented articles.