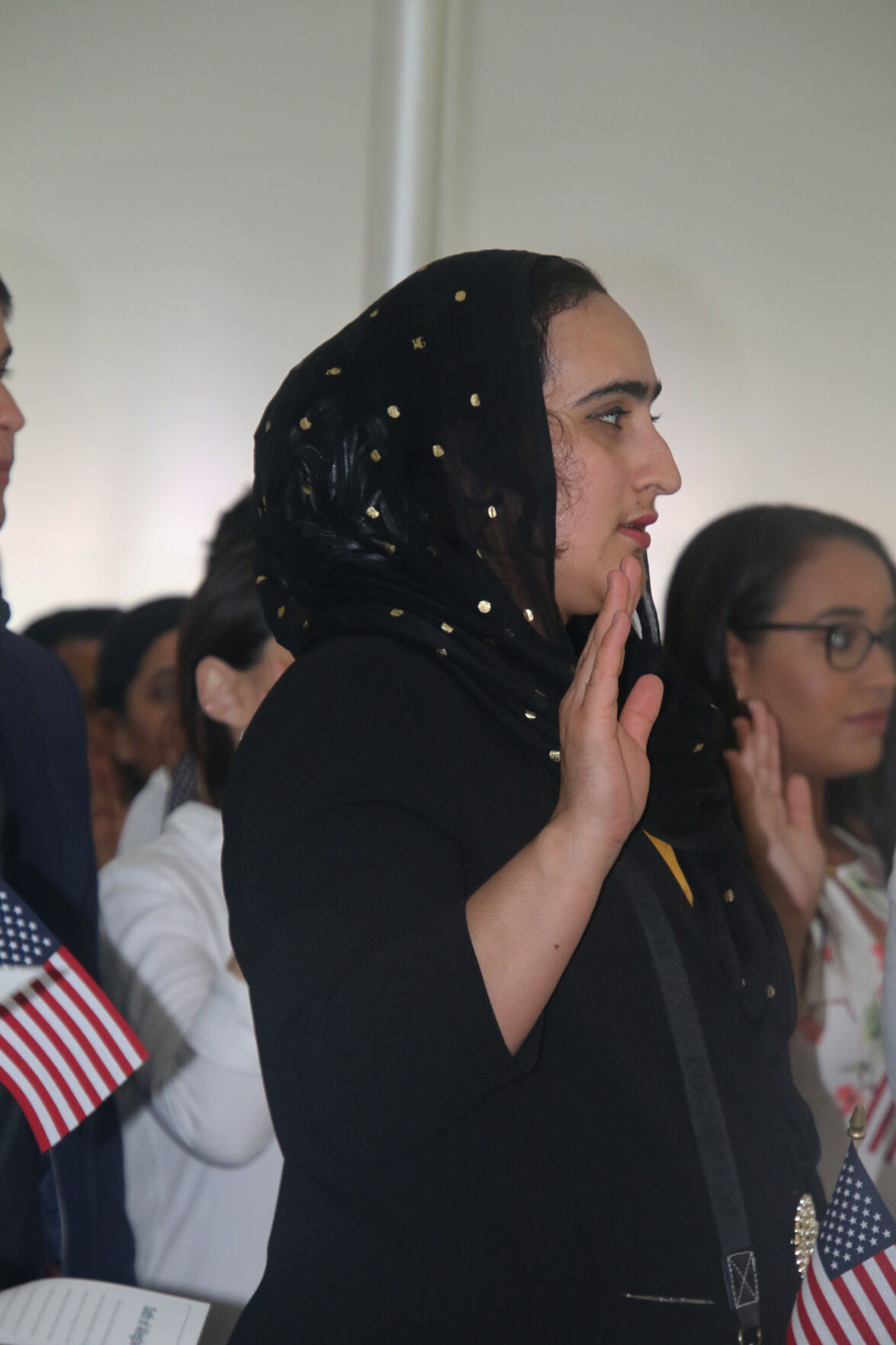 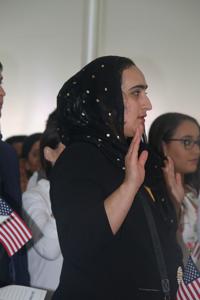 Zubaida Khoram,34, taking the Oath of Allegience during the US Naturalization Ceremony in Indianapolis on July 3. Photo by Brandon Barger, TheStatehouseFile.com 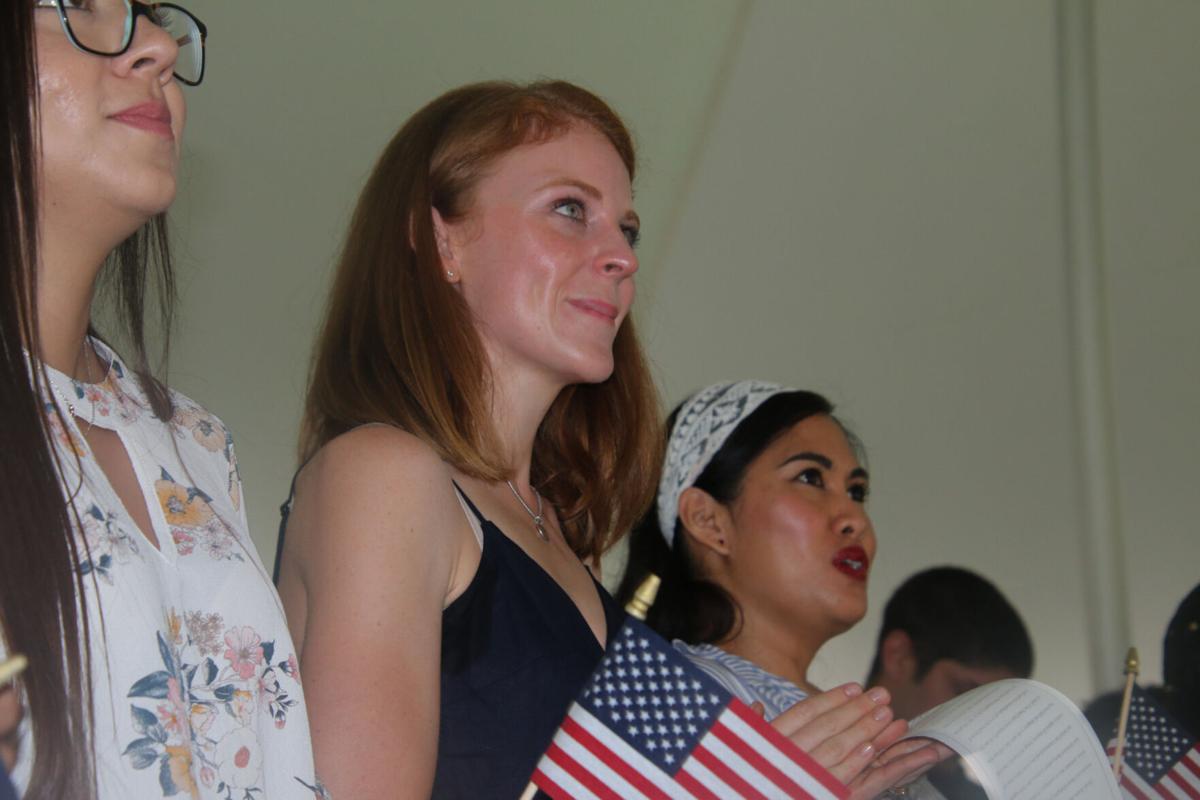 Dr. Elena Muensterman,28, claps after taking the Oath of Allegiance during the US Naturalization Ceremony in Indianapolis on July 3. Photo by Brandon Barger, TheStatehouseFile.com

By Victoria Ratliff TheStatehouseFile.com INDIANAPOLIS—To shield his then 8-year-old son from war, Baitullah Khoram moved his family to the United States in 2014 after working for the U.S. Air Force in Afghanistan. Wednesday, the 39-year-old father and his wife, Zubaida, each gripped an American flag that is now their flag as they and 96 other immigrants became U.S. citizens. “This is a lot better here,” he said, his face lit with excitement. “Afghanistan is a country still in war. For the moment it’s not a good place for your kids to be.” [caption id="attachment_39354" align="alignleft" width="331"]

Zubaida Khoram, 34, taking the Oath of Allegiance during the U.S. Naturalization Ceremony in Indianapolis on July 3. Photo by Brandon Barger, TheStatehouseFile.com[/caption] For the 30th time, U.S. District Court Judge Sarah Evans Barker presided over the naturalization ceremony, held outside the Indianapolis home of America’s 23rdpresident, Benjamin Harrison. Harrison’s great-great-grandson, Kim Morsman, traveled to Indianapolis from his Philadelphia home to welcome America’s newest citizens. And children from the audience were asked to hand out American flags to each immigrant when they stood when their country of origin was called. The immigrants represented a veritable United Nations: Afghanistan, Dominican Republic, India, Taiwan, among others. When the sole immigrant from the United Kingdom stood, Barker jokingly told her not to have any hard feelings against America over the Revolutionary War. After each immigrant’s nation was named, they stood holding their right hand aloft and repeated the oath that united them as one nationality: American. Each vowed to “absolutely and entirely renounce and abjure all allegiance” to their former homeland, and to “support and defend the Constitution and laws of the United States of America against all enemies, foreign and domestic,” and to even fight for this nation if necessary. The meaning of the 140-word oath wasn’t lost on the new citizens. Raul Guerrero was at the ceremony to support his mom, Josefina, 67, who was the oldest immigrant to become a citizen. The family moved to the U.S. from Mexico in 1995, but Guerrero said his mom initially decided against citizenship. However, he said, after making this her home she realized she wanted to be able to participate fully in the civic life of the nation that had welcomed her family, including by being able to vote. “She wanted to give the country something since the country gave to us,” Guerrero said. Elena Muensterman, 28, from Italy, first visited the U.S. as a high school foreign exchange student. While here, she met the man who would become her husband. Though she returned to Italy, she said she knew then she wanted to return to America to complete her education. [caption id="attachment_39351" align="alignright" width="421"]

Dr. Elena Muensterman, 28, claps after taking the Oath of Allegiance during the US Naturalization Ceremony in Indianapolis on July 3. Photo by Brandon Barger, TheStatehouseFile.com[/caption] Four weeks ago, Muensterman completed her doctorate degree in clinical pharmaceutical sciences from Purdue University. Recently, she and her husband visited New York where they saw the Statue of Liberty and Ellis Island, the first American soil for some 12 million immigrants from 1892 to 1954. Taking her oath of citizenship only a day before Independence Day “means a great deal as we remember the values of democracy and how this country started, and hopefully as new citizens we can bring those values forward,” she said. With her new rights as an American citizen, she hopes to volunteer her time – including for South Bend Mayor Pete Buttigieg’s campaign to win the Democratic nomination for president. She also said she wants to use her new degree to study or even cure diseases using the resources America has that Italy doesn’t. In a time when immigration has become a hot-button political issue, Barker stressed that these immigrants are now citizens, not second-class citizens. “When you hear someone say that you don’t belong here, don’t pay any attention,” Barker said. “When you hear someone say you’re not as good as the immigrants who came before you who built our country, don’t pay any attention.” And, she added, “If you are second guessing your decision to become American citizens in light of recent controversies, know that the vast majority of Americans affirm your decision.” Victoria Ratliff is a reporter for TheStatehouseFile.com, a news website powered by Franklin College journalism students. [ngg_images source="galleries" container_ids="73" display_type="photocrati-nextgen_basic_thumbnails" override_thumbnail_settings="0" thumbnail_width="100" thumbnail_height="75" thumbnail_crop="1" images_per_page="0" number_of_columns="0" ajax_pagination="1" show_all_in_lightbox="0" use_imagebrowser_effect="0" show_slideshow_link="1" slideshow_link_text="[Show as slideshow]" order_by="sortorder" order_direction="ASC" returns="included" maximum_entity_count="500"]