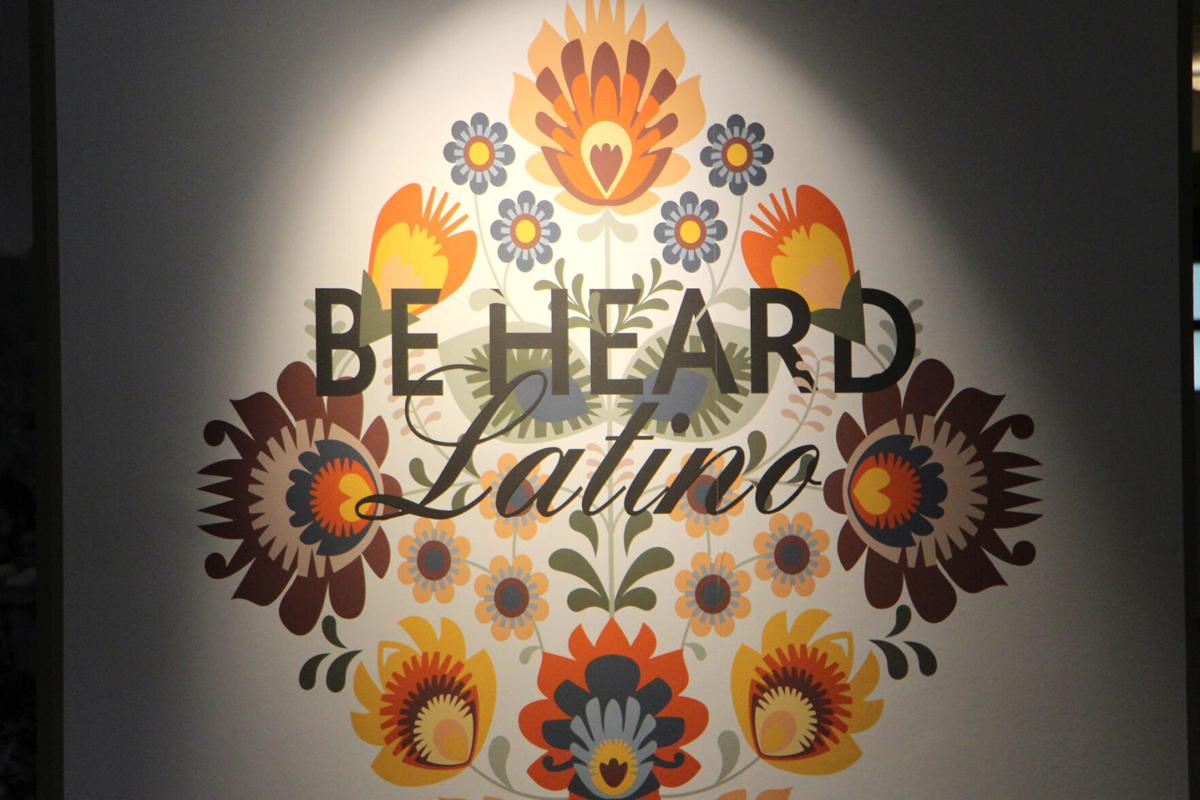 A sign displayed on the wall of the Latino Heritage installment in the Indiana Historical Society titled “Be Heard.” Photo by Eddie Drews, TheStatehouseFile.com 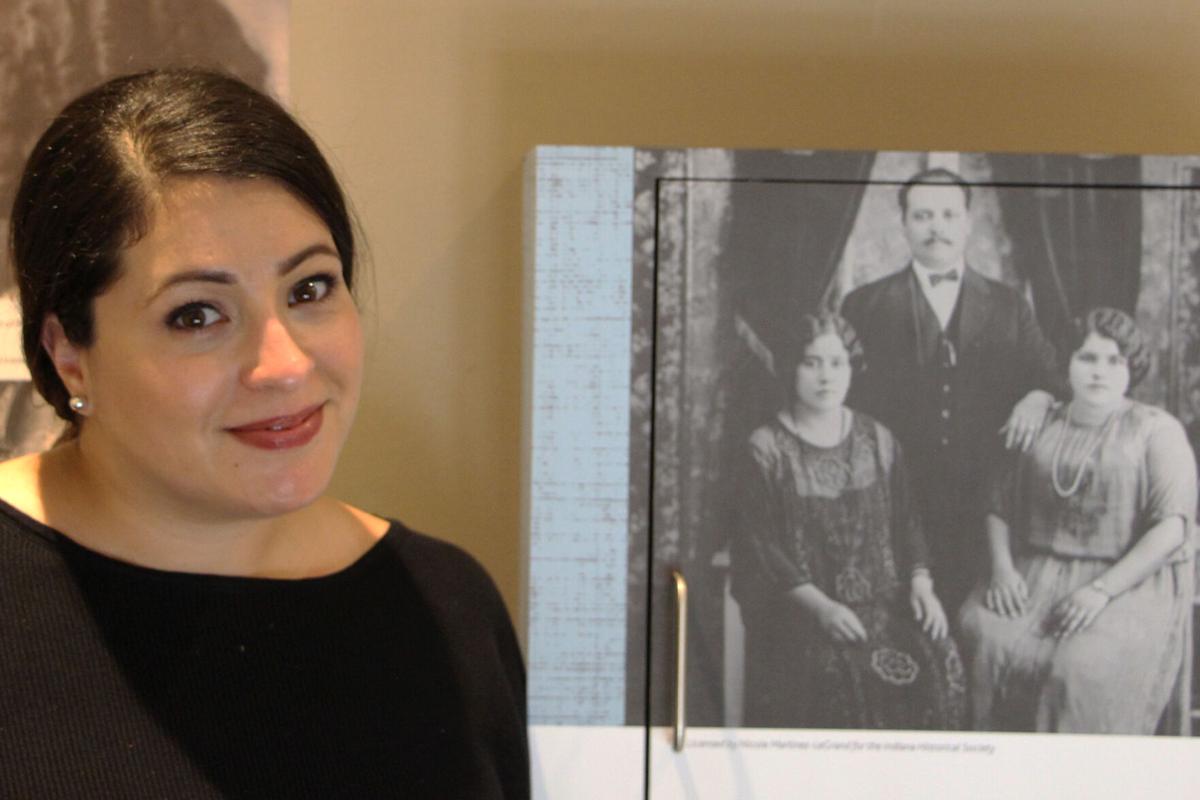 Nicole Martinez-LeGrand, coordinator of multicultural collections at the Indiana Historical Society, Stands next to a photograph of her ancestors. Photo by Eddie Drews, TheStatehouseFile.com 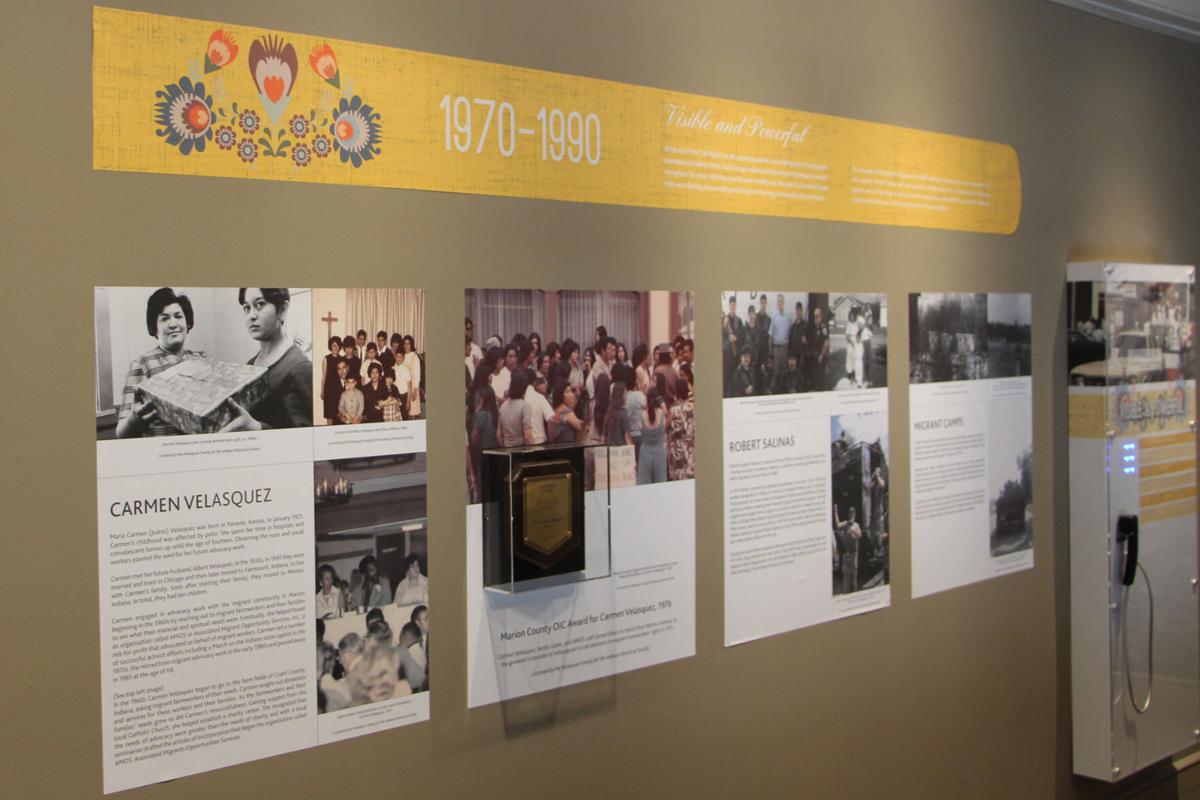 By Dionte Coleman TheStatehouseFile.com INDIANAPOLIS—A photograph hanging on the wall at the Indiana Historical Society showing a Latino man with two women has a special meaning for Nicole Martinez-Legrand. That photo, part of the historical society’s latest exhibit on Latino Experiences in Indiana, is of her family members who settled in Indiana in the early 1920s. [caption id="attachment_36486" align="alignright" width="294"]

The Indiana Historical Society program “Be Heard” highlights the Latino experience in Indiana. Photo by Eddie Drews, TheStatehouseFile.com[/caption] The display, the second of the society’s three-part Be Heard series, reveals the long and deep roots Latinos have in Indiana. Part one covered the LGBTQ+ community last year, part two the Latino community this year, and the Asian community will be covered in part three next year. The series explores minority cultures and how they have developed over the years in Indiana history. U.S. Census Bureau data from 2016 show that Latin Americans make up 6.5 percent of Indiana’s population, about a one percent increase from the 2010 census. And among those numbers is Martinez-Legrand, who was born in Indiana but has roots in Mexico. With the knowledge that her family immigrated to the United States in 1917, she has made it her passion to find the history of minority communities living in Indiana. Now the Multicultural Collections coordinator, Martinez-Legrand is behind the Be Heard series, and understands why history is important to explore no matter what or where you come from. “I think it’s important for people to know and understand that the Latino community has been here for almost 100 years, what’s important to know is that when we’re talking about the Latino community, we’re talking about over 20 different countries.” Martinez Legrand said. [caption id="attachment_36489" align="alignleft" width="329"]

A photo of her ancestors helped drive Nicole Martinez-LeGrand to understand the history of the Latino experience in Indiana. Photo by Eddie Drews, TheStatehouseFile.com[/caption] Legrand believes that there are a lot of stories to be told. There have been people who have died, and with them goes their stories from their life. It gives the community a great sense of pride to share those stories of where they came from, and how they have always had a place in Indiana’s history. In addition to her current role, Martinez-Legrand is in charge of tracking the ancestry of the various people whose stories are displayed in the exhibits. While uncovering the history of Latin Americans and where they immigrated to in Indiana, she discovered that her own family traveled here in the 1920s. “Latinos have been in Indiana throughout our statehood and pre-statehood history, but really in 1919 is when the foundational community began. So, when people ask why do they come here, immigration isn’t just one solid reason it’s always a myriad of reasons,” Martinez-Legrand said. During the early 1900s one of the major reasons for people wanting to emigrate to the United States was poverty and the Mexican Revolution. Many people fled Mexico and other Latin American countries for safety and better opportunities for their families. One of the places immigrants ended up was Indiana Harbor, a neighborhood in East Chicago, which was considered one of the most diverse neighborhoods around. There were people with Polish, German and Irish roots in addition to the Latin Americans. One of those families moving into the area was Martinez-Legrand’s great-great grandparents. [caption id="attachment_36487" align="alignleft" width="278"]

The Indiana Historical Society’s “Be Heard” program tells the story of Latinos in the state. Photo by Eddie Drews, TheStatehouseFile.com[/caption] “Before coming to the (Indiana) Historical Society, I had already been tracking my family from Mexico to the United States,” she said, explaining that she traced them to Indiana Harbor. The exhibit is divided into four sections on the fourth floor of the Indiana Historical Society, and each section covers four themes: work and service, community and contributions, immigration and adjustment, and struggle and resistance. A figure represents the theme in each section, which provides more insight into the hardships that Latin Americans faced and continue to face. The Latino Experiences in Indiana exhibit will be on display at the Indiana Historical Society until Nov. 3, with tours starting at 10 a.m. Dionte Coleman is a reporter for TheStatehouseFile.com, a news website powered by Franklin College.