Kagome Woytsek stands ready for her band to perform. Photo by Tabby Fitzgerald, The Statehouse File. 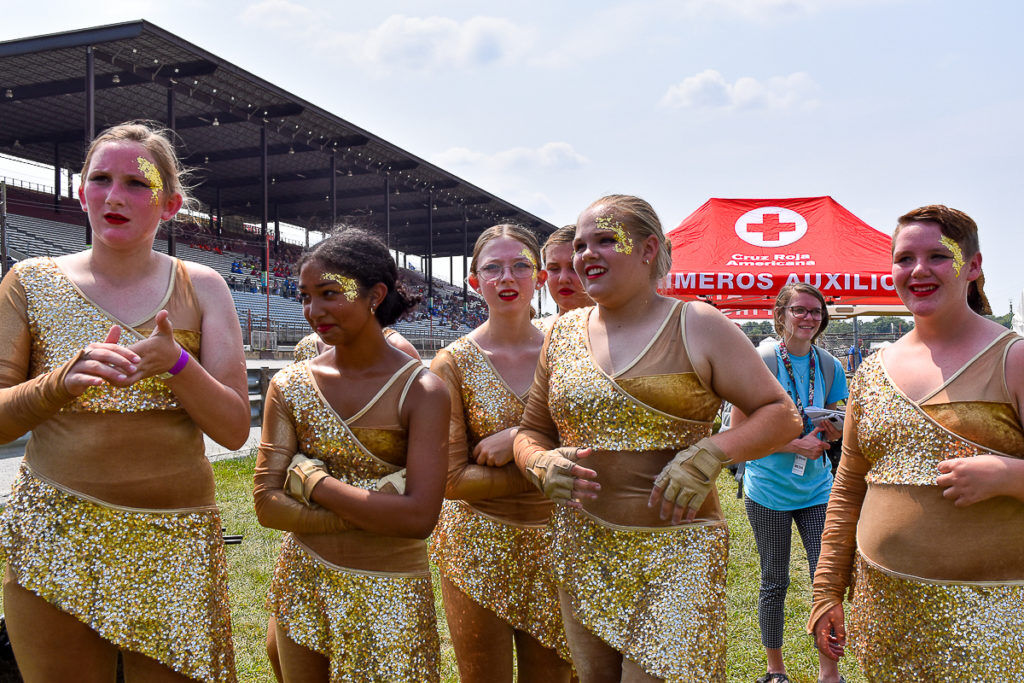 The color guard stands together after finishing their performance. Photo by Tabby Fitzgerald, The Statehouse File. 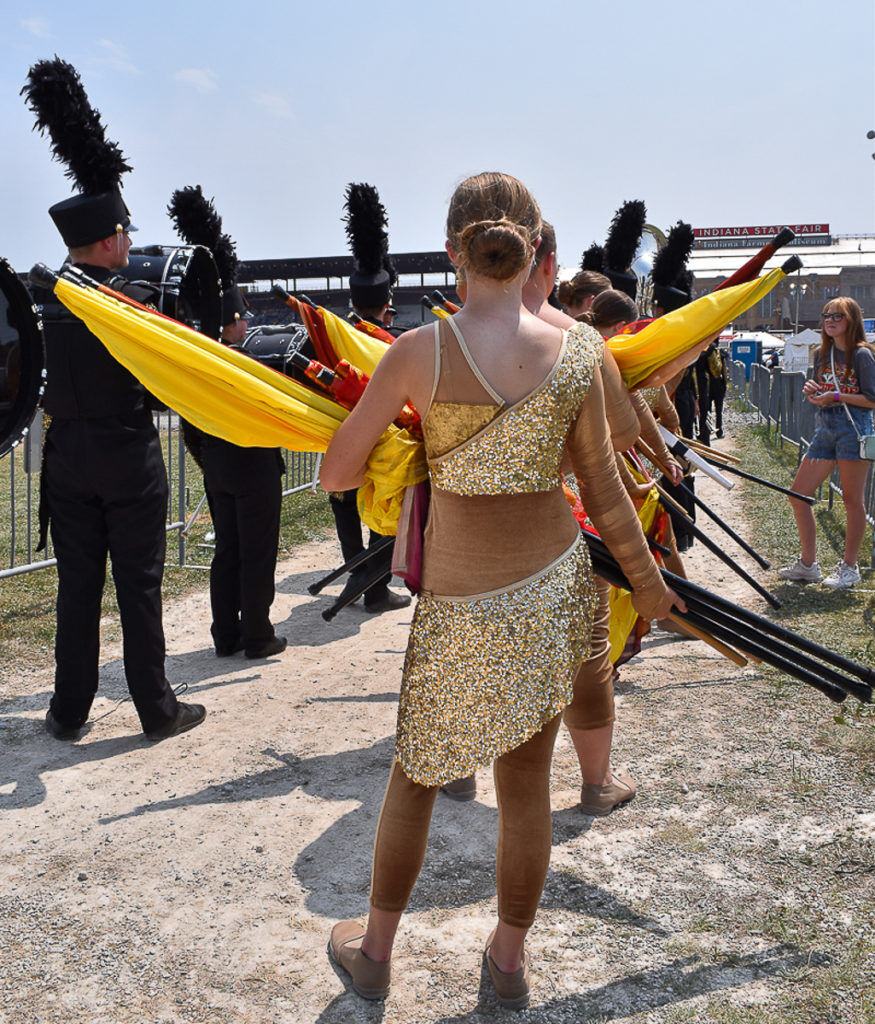 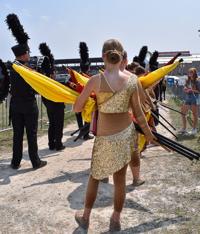 The band and color guard wait to be let into the stadium to perform. This was most students' first year participating in Band Day. Photo by Tabby Fitzgerald, The Statehouse File. 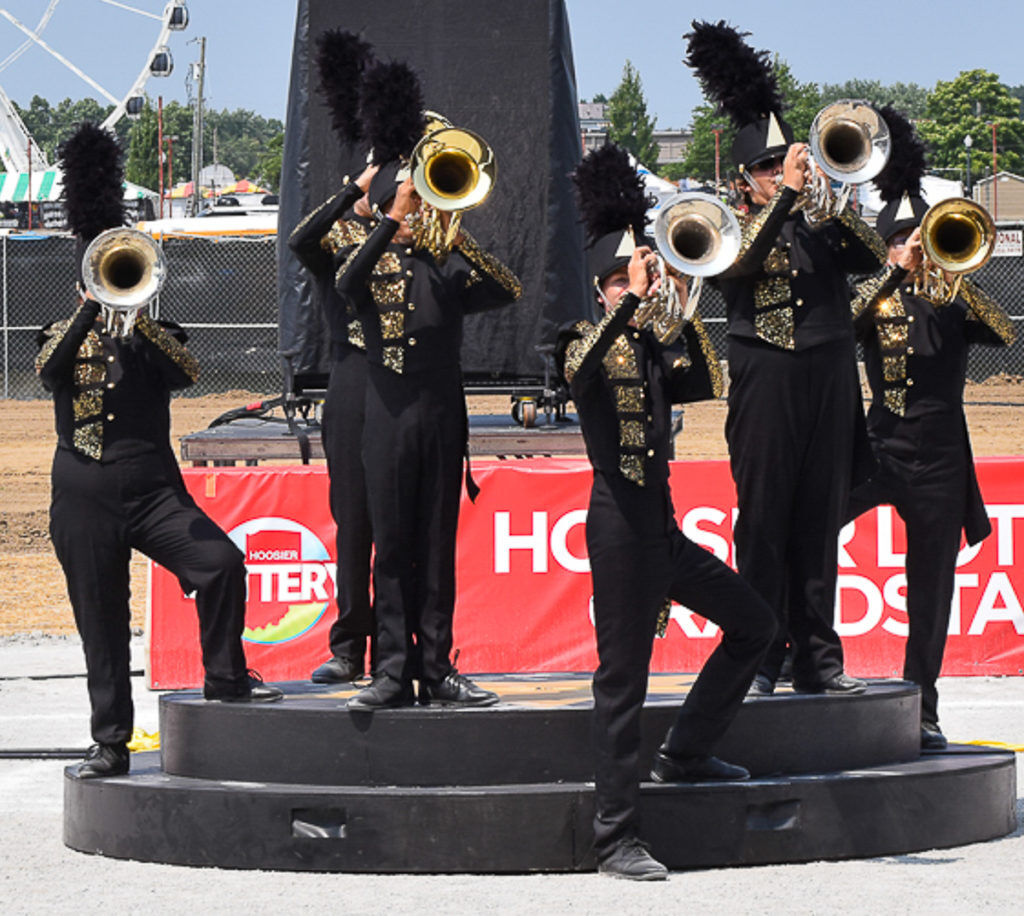 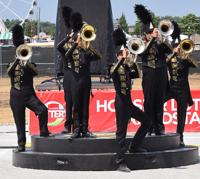 The trombone players of the band stand together on a platform as they perform mid-song. Photo by Tabby Fitzgerald, The Statehouse File.

Reed Ulery, one of the Decatur County Greensburg Marching Band directors, leads the band into the infield before they perform. Photo by Tabby Fitzgerald, The Statehouse File. 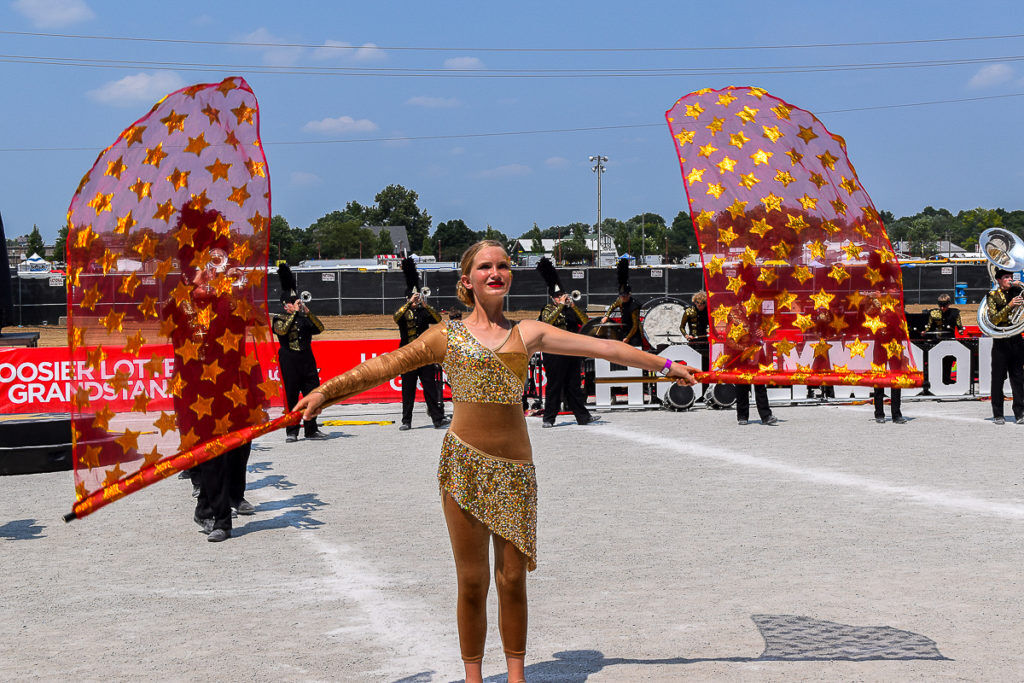 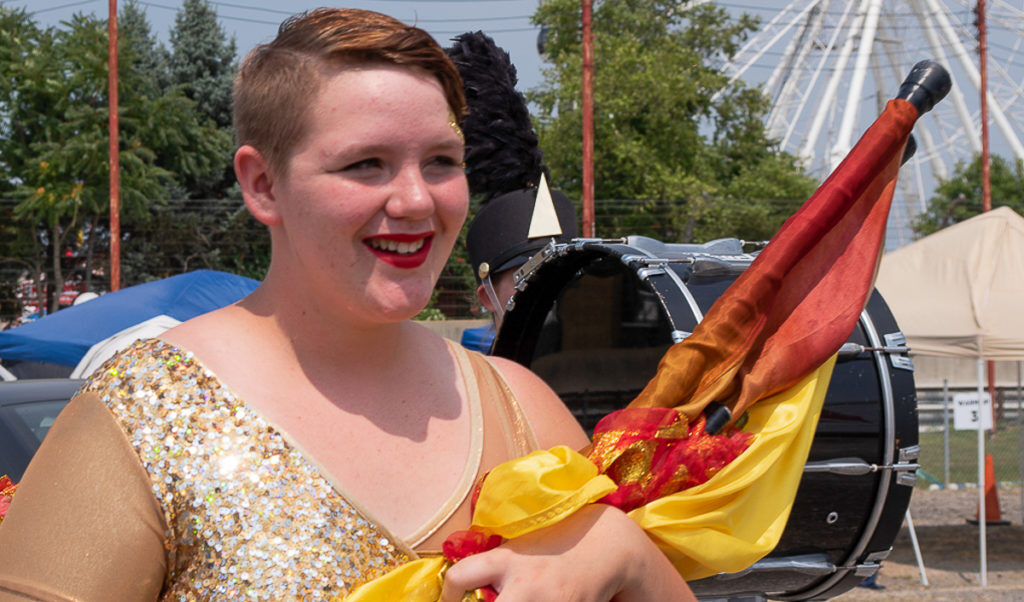 Abby Field smiles as she prepares for her band to enter the stadium. Photo by Tabby Fitzgerald, The Statehouse File. 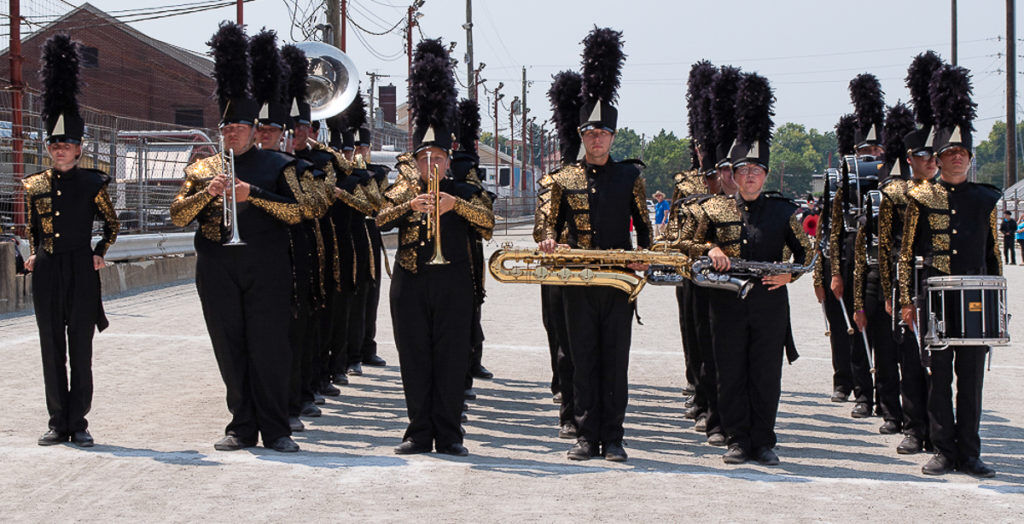 The Decatur County Greensburg Marching Band stands ready for their performance to start. Photo by Tabby Fitzgerald, The Statehouse File. 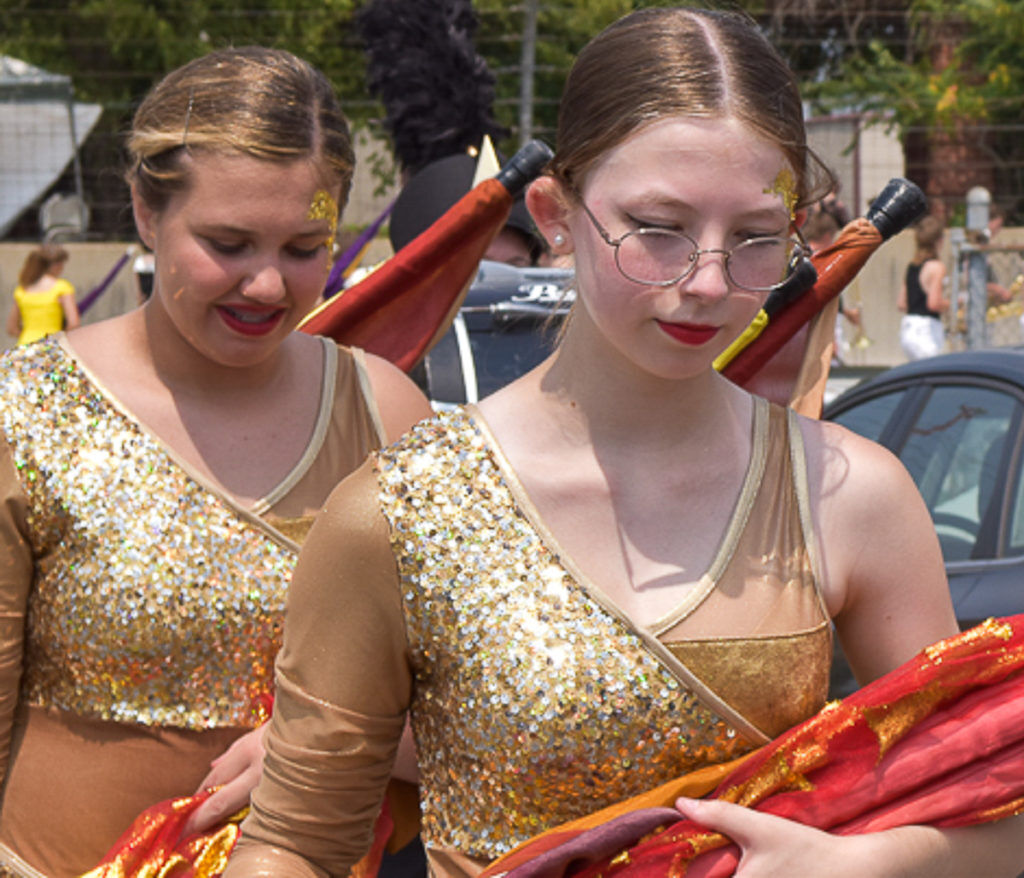 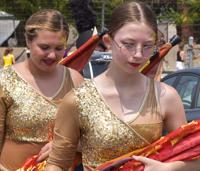 Kaydence Hoyt, a sophomore at North Decatur Junior-Senior High School, stands in line with the color guard after they finish practicing. Photo by Tabby Fitzgerald, The Statehouse File. 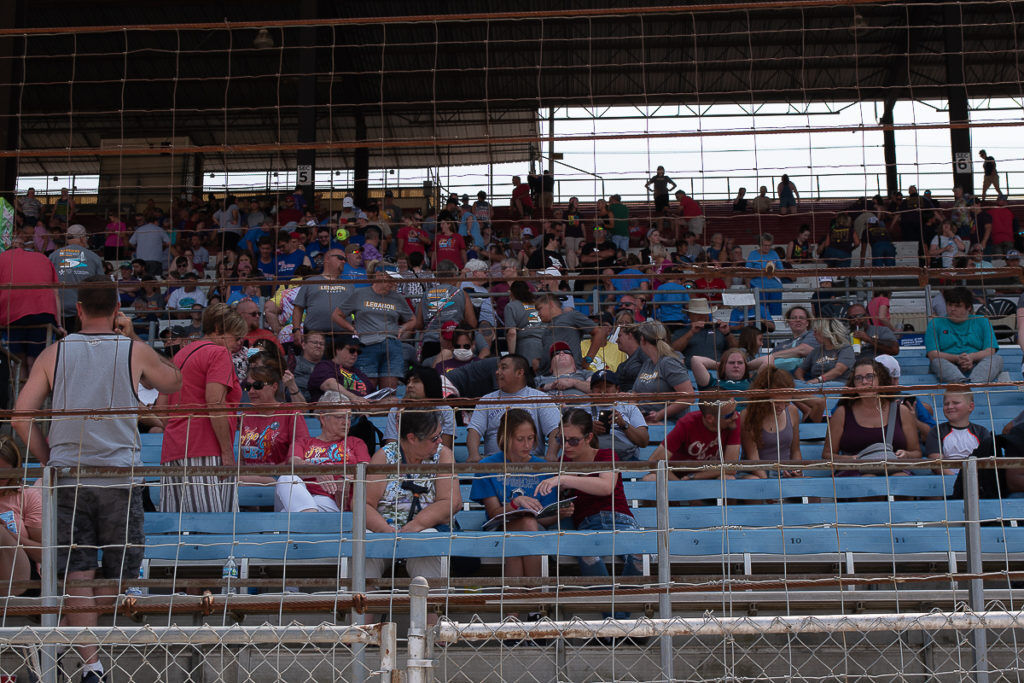 The audience fills the stand as they wait for the next band to perform. Photo by Tabby Fitzgerald, The Statehouse File.

INDIANAPOLIS—The Decatur County Greensburg Marching Band stretched in a long line across the Indiana State Fair infield Friday in their black and gold uniforms, the guards’ skirts flapping in the wind and the band’s hat plumes nodding while the sun glinted off their instruments.

They waited, fidgeting with their instruments in the large dusty parking lot, surrounded by school buses and trailers.

They were just one of 33 high school bands participating in the 74th annual Band Day at the state fair—the first taking place since 2019 because of COVID-19.

This was Ulery’s first Band Day as band director and the band’s fifth year to participate. All five years, they moved on to the Sweet 16 finals. The bands that rank in the top 16 move on to the night competition to determine a state champion.

The band, made up of students from Greensburg, North Decatur and South Decatur high schools, stood at attention on the edge of the grandstand watching the Spirit of Muncie band and Guard perform just before them.

Decatur’s show, “City of Stars,” was about Hollywood, and the songs related to the feeling of being a rising performer. The music started with a mellow tone that crescendoed into a grand ending that had the audience beaming.

Walking off the field hot afterward, sweaty, makeup dripping off their faces, the band got water and posed for a group photo.

Out of breath after performing and a little disoriented, trumpet player Kagome Woytsek said, “The setting out there is totally different than at home.”

Brenna Smith, a first-year drum major, said she felt tired but excited for the awards ceremony, which happened after the last band around 4:30 p.m. The chosen 16 bands would compete for the championship title, and Decatur did not expect to pack up for home until they’s had a long day.

“I got up at 6:30 a.m. and got to the school at 8 a.m. We did a visual run, and then we headed here, and then we did some warming up, and then we just performed. Then we’re headed to awards,” Smith said.

Carson McCord, who plays baritone said, “We had the show up and running within two weeks—just 1 p.m. to 5 p.m. practices.”

“I was standing on the sideline of the 50-yard line and could see the energy on their faces,” Ulery said afterward. “I think it was a really great show.”

Band dad Jeff Koontz said he hoped they would make it to the night show. “It would look even better with all the lighting that we got going on.”

Koontz has been a band dad for the past five years. The band parents help with creating all the props and move instruments and spend time collapsed in the shade of the equipment truck together with their matching shirts when not helping with the show.

According to Doug Fletcher, the Indiana State Fair Band Day coordinator, the fair was focusing on viewing the day as a celebration and encouraging all bands that participated.

However, due to COVID-19 rates rising in some counties, not all bands that signed up were able to participate. Of the 36 bands that signed up, three did not attend, one being Anderson High School. According to Richard Geisler, Anderson’s band director, in an email to The Statehouse File, they were feeling devastated over not being able to participate.

But the band kids at the fair, the pressure of performance lifted, were laughing with their friends, eating food between the school busses and making plans to explore the rest of the fair.

Alexa Shrake is a reporter for TheStatehouseFile.com, a news website powered by Franklin College journalism students. Reporter Tabby Fitzgerald contributed to this story.

Editor's note: This story was amended to clarify what high schools are represented in the Decatur County Greensburg Marching Band.