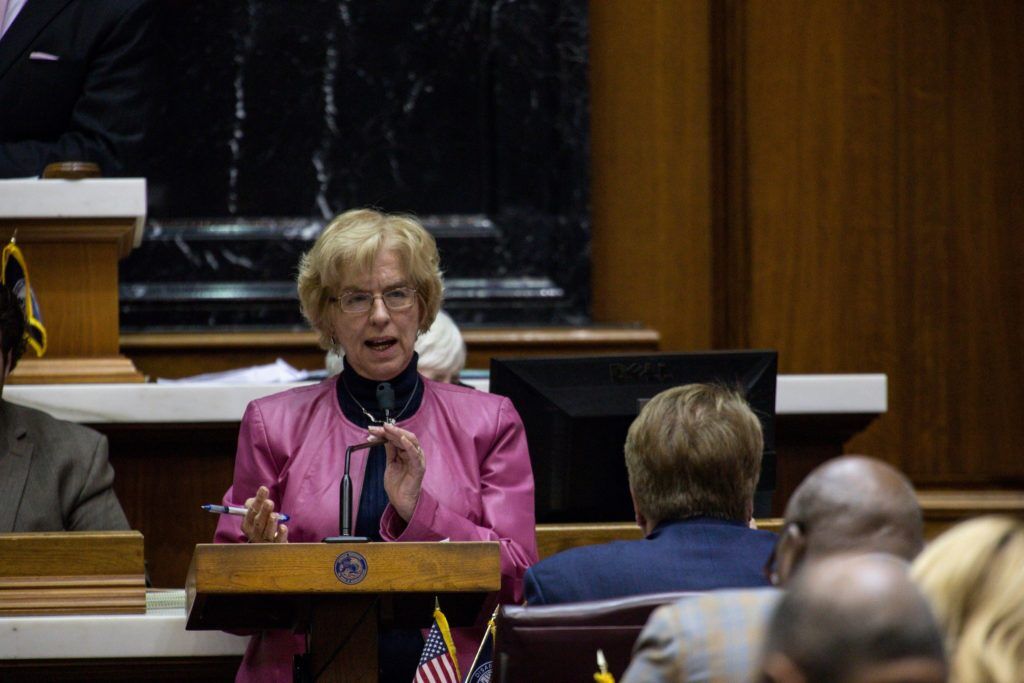 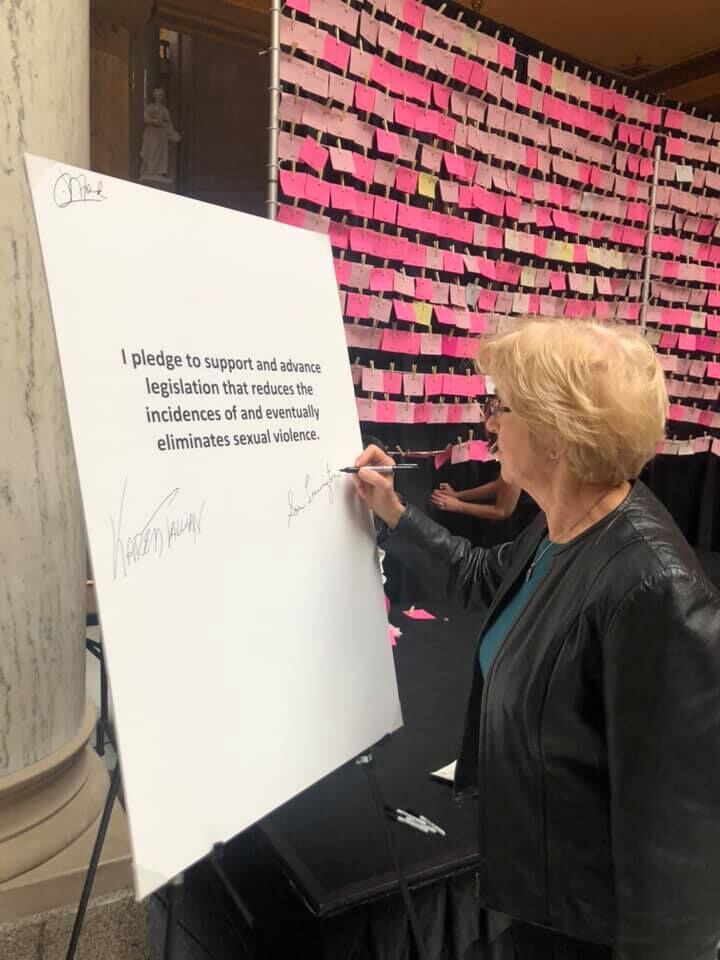 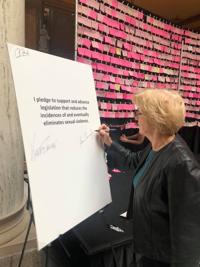 INDIANAPOLIS—Rep. Sue Errington, D-Muncie, 79, did not have a good session.

Her elements of rape bill died in a Senate committee. Her marijuana reform bill didn’t pass the House. Neither did her land banks bill. Her sex education bill didn’t even get a hearing.

Nonetheless, she summed up the 2021 session saying she was happy to vote in favor of the state budget and see the police reform bill pass.

Errington’s innate optimism is how she survives serving as a representative in Indiana’s superminority.

“You have to look at things in the long run rather than the short range,” Errington said.

Strong willed but at first glance seemingly soft spoken, Errington is known for her work around the state on behalf of women’s rights, serving first as a senator in 2006 and now as a representative.

Originally from Kosciusko County, she graduated from a class of about 16 students. While she came from a small town in northern Indiana, she had dreams of making a difference for women’s rights and her community.

Before Errington became a state representative in 2012, she worked for Planned Parenthood, ascending from her role as a volunteer and activist to public policy director, a post which she held for 17 years.

Errington’s main goal at the time was outreach and education in a state where many do not approve of Planned Parenthood due to its ties to abortion. People would always ask about abortions, and she would have to explain that isn’t the only thing the organization does nor is it done at all clinics.

“I felt like I was doing important work,” Errington said.

Errington would spend her week in Indianapolis talking with legislators and go home to Muncie on the weekends to see her now-late husband, Paul, and her cats.

One of the things Errington would work on when she was public policy director for Planned Parenthood was showing legislators around clinics during election season.

“One candidate asked, ‘Well, where do you do abortions?’ and we didn’t do abortions in Muncie,” Errington said. “There’s a lot of myths about Planned Parenthood.”

When Errington worked for the Muncie branch, many Ball State University students would go to her for help on their papers about abortion, but the conversations ended up covering all topics, including birth control and sexuality.

“They would often ask me questions about sexuality in general,” Errington said. “There is so much misinformation and lack of information about human sexuality that they weren’t getting in school and so they asked me.”

One of Errington’s two daughters, Amy Oversmith, said her mom is passionate about her convictions. She remembers when she looked through her mom’s jewelry box and saw a gold coat hanger charm and wore it to elementary school. She later found out that it was a statement to protest backalley abortions.

“I think my mom helped give my sister and me guidance to do what you think is right, not necessarily what is popular,” Oversmith said.

Errington’s other daughter, Sara Errington, said her mom inspired her. She said she probably wouldn’t be a firefighter if it wasn’t for her mom teaching her to be “ferociously independent.”

“My mom is a really tough woman,” she said. “Growing up, it was unusual for a middle-class woman to have a career, and she really enjoyed work.”

She said she remembers folding letters and putting out yard signs during election season and going to a rally for the equal rights movement.

“We all put on white dresses and took a bus to Washington D.C. I remember marching with hundreds of thousands of women to get the ERA passed,” she said. “I don’t think too many kids did that with their mothers.”

Since becoming a legislator, Errington has pushed for bills on more sexuality education and rights for women. She often works with Planned Parenthood as she authors bills to check if she is leaving any information out that needs to be added.

Longtime friend Sen. Tim Lanane, D-Anderson, said he met Errington when she first served in the Senate in 2006. Lanane and Errington share some of the same constituency.

“We’ve worked closely together over the years and have a very easy and good relationship,”  Lanane said. “She’s very knowledgeable and a person who is very passionate about doing things to help her community, and I’ve enjoyed working with her.”

This session, Errington’s House Bill 1366 on sex education in schools that would have included education on sexuality and sexually transmitted diseases didn’t get a hearing and died in the House Education Committee.

Indy Feminist is an activist group that saw the bill and reached out to Errington to make infographics about the bill.

“Even though it didn’t get a hearing, it is getting a public airing,” Errington said.

HB 1176 on elements of rape was a bill that would define consent, which Errington worked on with Rep. Sharon Negele, R-Attica. Errington said working with someone across the aisle helps move bills along the legislative process faster.

“I found it very nice to work with Rep. Errington,” Negele said. “I like bouncing ideas off of her, and she has resources that she’ll bounce ideas off of, and we both come back together to figure out what’s the best angle.”

Negele said they plan on bringing the elements of rape bill back in the next legislative session.

“I think it shows that when you’re in the majority, you have a much better chance of getting things through,” Errington said. “There’s a lot of conflict in the General Assembly, but there are also areas where we can work with people across the aisle when you build up those relationships.”

Rep. Peggy Mayfield, R-Martinsville, said there are always different opinions, but “you’ve got to roll with it.”

“We disagree, we have different opinions and we deal with that,” Mayfield said. “There is a tremendous amount of collaboration in the Indiana General Assembly, both Republican and Democrat and House and the Senate. It’s the only way you can get this stuff done.”

The bill died in the House committee this session. While none of Errington’s bills passed, she plans to continue bringing up issues like sex education and land banks that she says need serious attention. Errington said she wants to introduce more environmental legislation, and she is currently working on a pollinator study, hoping to create protections since many pollinators are dying.

“Of course, when you have a bill or one you’ve co-authored on and it makes it through, you feel good about that,” Errington said.

This year’s session, then, has been a “mixed bag.”

“There were so many changes,” Errington said. She was happy to vote for the budget for the first time, and the police reform bill she supported passed.

“I guess every year I start out optimistic and hopeful,” Errington said, “and sometimes things do get better.”

Alexa Shrake is a reporter for TheStatehouseFile.com, a news website powered by Franklin College journalism students.