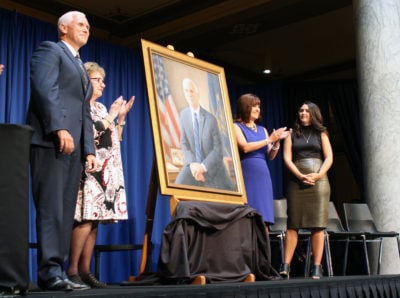 Vice President Mike Pence, his mother Nancy, his wife Karen and his daughter Audrey unveil his governor’s portrait. His wife Karen designed the tie that he was wearing in the portrait. Photo by Abrahm Hurt, TheStatehouseFile.com 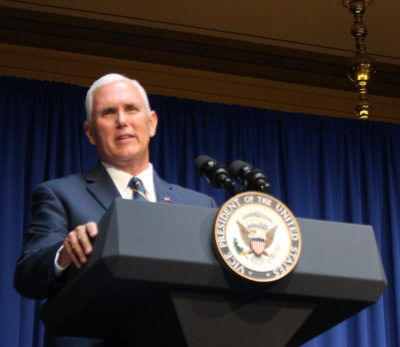 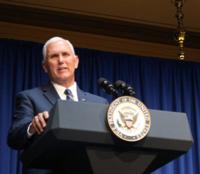 Vice President Mike Pence speaks during his governor’s portrait unveiling at the Statehouse. Pence thanked his family and Hoosier for their support. Photo by Abrahm Hurt, TheStatehouseFile.com 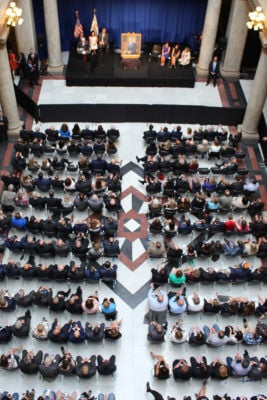 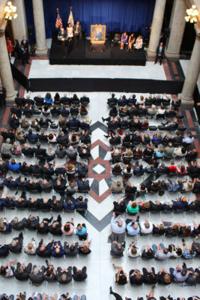 Vice President Mike Pence, his mother Nancy, his wife Karen and his daughter Audrey unveil his governor’s portrait. His wife, Karen, designed the tie that he was wearing in the portrait. Photo by Abrahm Hurt, TheStatehouseFile.com[/caption]

INDIANAPOLIS — In Vice President Mike Pence’s official governor’s portrait, he sits on his desk in an unbuttoned suit with a gentle smile. A family photo, a stack of books and a Bible sit in the background. [caption id="attachment_32720" align="alignright" width="237"]

Vice President Mike Pence speaks during his governor’s portrait unveiling at the Statehouse. Photo by Abrahm Hurt, TheStatehouseFile.com[/caption] “First off, let me just say, I do have more than one tie,” Pence said when the portrait was unveiled Friday during a ceremony at the Statehouse. Pence wore the same tie that is in the portrait to the ceremony. The tie, which reflects the colors and stars of the state flag, was designed by his wife, Karen. Governor portraits are a tradition in Indiana that dates back to 1869. The Indiana Governors’ Portrait collection now contains 54 paintings. Indianapolis artist Mark Dillman painted the portrait. Dillman also painted former Gov. Joe Kernan. In the portrait, Pence is accompanied by a stack of law books, which belonged to his father. Pence said they are the tribute to his parents. “We all stand on the shoulders of those who went before,” he said. “And everything I am is owing to the sacrifices, the successes and the efforts of my dad, Ed Pence, and my wonderful mother, Nancy Pence Fritsch.” On his other side, sits an open Bible — the same Bible that sat on his desk during his time as governor and that he used as he was sworn in as the vice president. [caption id="attachment_32709" align="alignleft" width="209"]

Vice President Mike Pence’s official governor’s portrait was unveiled at the Statehouse Friday before a large audience. Photo by Rachel Hoffmeyer, TheStatehouseFile.com[/caption] Pence attributed the smile on his face to his wife. Dillman and his wife, Lynn, visited Washington to take pictures for to reference for the portrait. Pence was in a pose that was uncomfortable, and Karen walked in and could sense that things were not going well. “She stood behind Lynn as she was taking a picture, and she snapped a picture of me looking at my wife,” Pence said. “It was just one, and when all the pictures came back the consensus choice of everyone was the smile on Mike’s face when he was looking at Karen.” The portrait will formally be installed in the governor’s office Thursday. “I owe this moment to my family — my immediate and my extended family — but mostly I owe this moment to the good people of Indiana,” Pence said. “Words really cannot describe the honor its been to serve the people of this state.”

Abrahm Hurt is a reporter for TheStatehouseFile.com, a news website powered by Franklin College journalism students.