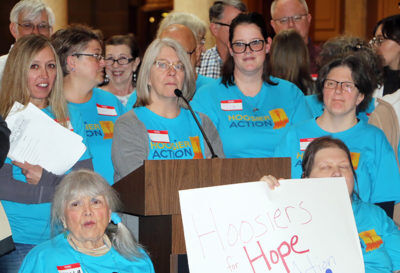 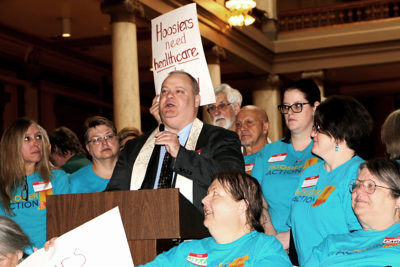 By Haley CarneyTheStatehouseFile.com INDIANAPOLIS— Hoosier Action, a community organization advocating for rural and small town Indiana, gathered at the Statehouse on Wednesday to lobby for an array of bills they say would improve lives. The group said they are pushing for HOPE: Health, Opportunity to Thrive, Prosperity and Environment. Some of the bills supported include House Bill 1294, which protects pregnant employees from discrimination against their employers; SB 192, giving impatient mental healthcare to children with Medicaid; HB 1191, offering more protection to both landlords and tenants; and HB 1257,  which requires a person who causes a spill of hazardous substances into water to report the incident to authorities. Georg’ann Cattelona, leader of Monroe County Hoosier Action, said they came to the Statehouse to talk to key legislators on bills that they believe protect and provide opportunity for Indiana citizens. Prior to the press conference, action members went to the offices of every member in the General Assembly to discuss the HOPE agenda and share their stories. [caption id="attachment_40714" align="alignright" width="400"]

Georg’ann Cattelona, Monroe County Hoosier Action Leader, spoke at the Hoosier Action press confrence. Photo by Haley Pritchett, TheStatehouseFile.com[/caption]  “We are united in the belief that all Hoosiers, no matter their income level or the color of their skin, should have prosperity, opportunity and hope,” she said. “We are Hoosiers who believe that a better state is possible for ourselves and our families.” Cattelona said she was first motivated to become an advocate for her community as a new mom, concerned about her child’s future.  When she reached out to her friends, neighbors and community, she said, she found she was not alone. “We wanted a better place to raise our babies and our children, we wanted a future,” she said. “Together we actually did create change. We made things happen, and we had a positive impact on our community.” Owen County Hoosier Action Leader Ed O’Brien, who said he has spent much of his adult life volunteering his time in his community to help make change, said a tragedy close to him pushed him to support HB 1182, which among other things creates state and county committees to review overdoses and suicides.  “Two weeks ago, my friend’s son lost his life to an overdose,” O’Brien said. “My heart went out to her because she could not get the proper medical care for her son. His death was totally preventable because we have Narcan, which reverses the effects of overdose.” O’Brien said the state needs to end the stigma around drug use and offer the treatment needed to save lives, rather than lock people up. “I joined Hoosier Action because I believed in an Indiana where my neighbors in small town and rural communities have the resources to be healthy and full of human connection and love,” he said. [caption id="attachment_40713" align="alignright" width="400"]

Pastor Lee Huckleberry, pastor at Park Christian Chuch Floyd County, wants lawmakers to stand up for minorites. Photo by Haley Pritchett, TheStatehouseFile.com[/caption] Park Christian Church Pastor Lee Huckleberry of Floyd County lent his support to Hoosier Action by expressing his frustration of the lack of help his community was receiving. Huckleberry said they needed to ask their legislators what they were doing for others to improve the lives of Hoosiers.  “We are all here today because we dare to imagine and work toward a brighter day for Hoosiers,” he said. “May our efforts be included in the result of a stronger, healthier, more equitable, and more hopeful Indiana.” Haley Carney is a reporter with TheStatehouseFile.com, a news website powered by Franklin College journalists.